On August 28, Rev. Sharon Stanley Rea, NFWM’s board representative for the Christian Church (Disciples of Christ) marched alongside members of the Farm Labor Organizing Committee from the AFL-CIO Washington D.C. headquarters to Reynolds American Inc. headquarters in Washington D.C to deliver a petition with 20,000 signatures of farm worker supporters.

The petition, to Thomas C. Wagner, Chairman of the Board of Reynolds American Inc. calls on Reynolds American to end human rights violations by signing an agreement that guarantees the farmworkers in their supply chain the right to negotiate improved wages and work conditions.

Rev. Stanley Rea spoke at the rally and passed along this powerful Farm Worker Blessing to the members of the Farm Labor Organizing Committee: 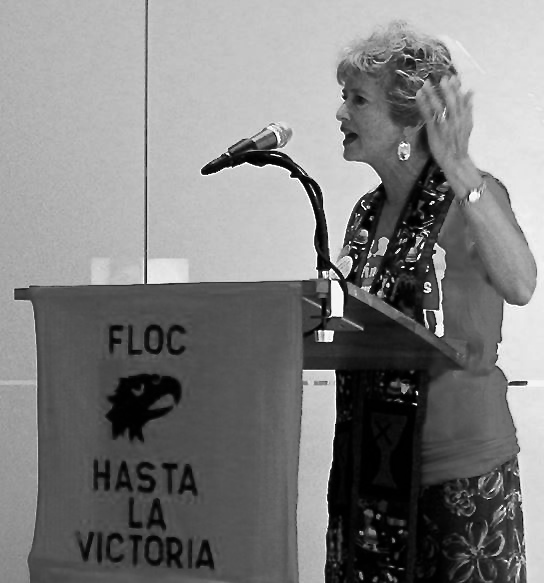 “As one born deep in the hollars and mountain hills of western North Carolina, who still has family there, who went to college there, who has worked and served in churches near Hickory and Fayetteville and Winston Salem, I personally am sad, and angry, and fired up about the injustices in tobacco fields of my home state!

As one who worked with refugees and immigrants for two decades in California’s great Central Valley—the heartbeat of Cesar Chavez’ relentless organizing work for farm workers—I’ve been a learner about just how often abuses happen across the country in our fields—and I can’t feel settled about the violence, and illness that is experienced so frequently by those who grow the food I eat.

But, as someone who comes from a faith perspective that is Christian, with a Jesus that talked about laborers in the vineyard (Mt. 20) that urged fair wages MUST be paid because ALL persons are valuable to God” and who with scriptures that taught all along that immigrants should be treated like CITIZENS among us—because God’s people themselves were slaves in the land of Egypt–That’s what really inspires me to stand together with you in your important sacrifices and cause for Farm Worker Justice!!

And so today, I want you to know that YOU DO NOT STAND ALONE, and that it is not me alone as a faith leader who stands with you either.  Rather, I (as a Disciples of Christ pastor) am here also with a Church of the Brethren leader. BUT IT’S NOT ONLY US, EITHER! For WE are members in the NATIONAL FARM WORKER MINISTRY, which, since 1920 began as The Migrant Ministry to offer aid, support, relationships, advocacy to farm workers. By 1939, the Migrant Ministries had established workers’ rights programs in 15 states. At, when farm workers began organizing themselves and at the time of the Delano, CA. grape boycott, the Migrant Ministry stood with farm workers. And in 1971, the Migrant Ministry spread across the nation to become the National Farm Worker Ministry, with dozens of Protestant, Catholic and multi-faith partners joining in through the years.

Today, as you dare to confront the world’s power of Reynolds Tobacco with your letter signed by 20,000, please know that walking with you are people of faith, from multiple denominations, who join as the National Farm Worker Ministry, to support your steps for justice!! We have walked with farm workers in the past. We will walk with you TODAY. And—we will continue to step, and step, and step again until the justice our God so desires is experienced by farm workers!! 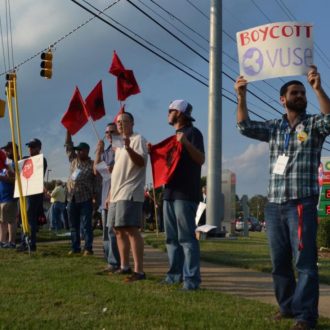