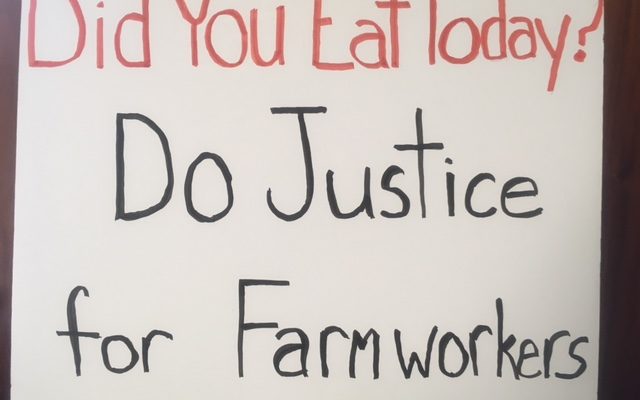 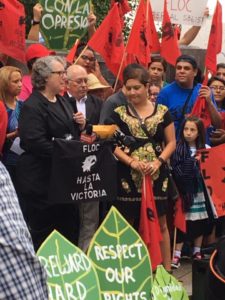 During the July 18th press conference, NFWM Director Julie Taylor announced that the National Farm Worker Ministry is filing a complaint with the NC Legislative Ethics Committee against NC Sen Brent Jackson and another against NC Rep David Lewis, both farmers in NC, for conflict of interest.

Ms. Taylor’s announcement said, in part, “Senator Jackson is the owner of a diversified farm in Autryville, NC and employs over 100 workers to plant, cultivate, and harvest numerous crops. A group of his employees have joined the Farm Labor Organizing Committee (FLOC). In 2015, seven employees filed a federal civil claim against Senator Jackson’s farm, seeking back wages for time worked while “off the clock.” In 2016, these seven were not hired back to the farm. They amended their claims in court to include retaliation through the help of their union, FLOC. After a mediation session, these claims were resolved through a financial settlement that was given final approval by a federal court judge this month.

In late June, Senator Jackson cosponsored Senate Bill 615 which made it illegal for farmers to agree to deduct voluntary union dues from workers who want to pay those dues. It also made it illegal for a farmer and his or her workers to reach a legal settlement that includes an agreement with a labor union.The bill was clearly aimed at stopping FLOC and their members from achieving sufficient resources to continue their work.” 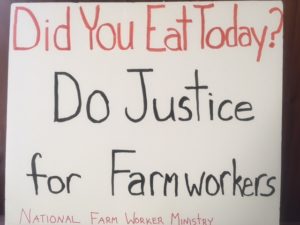 Ms. Taylor concluded, “I call the wider faith community, labor advocates and people of conscience in this state to join with us in questioning the motives of these two legislators. As public servants, their elected positions should not be places of personal financial advantage. We must do what we can in the avenues we have to be sure that farm workers are not denied their rights and can organize for their own self-determination.”