NFWM Board Gathers in Raleigh, NC

As the sweltering, August sun rose over North Carolina, farm Workers headed out to the dewy tobacco fields to continue harvesting the plants that were cut the day before. 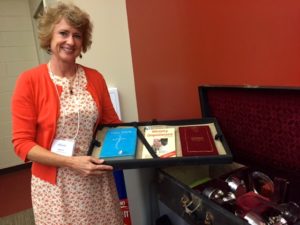 Later that morning of the 26th, the National Farm Worker Ministry Board representatives and staff gathered at NC State University in Raleigh and began their biennial meeting with prayer. Each person held in their hand a memento from the farm worker movement; a tangible reminder of NFWM’s years of work. As we prayed, we said aloud the names of those who have come before us yet continue to inspire us in the work ahead. Our farm worker partners were very present for us during this Board meeting.

Throughout the day, we heard reports from staff, Board members and committees about the work and status of NFWM over the past 6 months and saw visuals of NFWM’s work in action across the country.

In the late afternoon, we headed off to Eastern North Carolina to visit the Farm Labor Organizing Committee in Dudley, NC (population 11,000). FLOC Founder and President, Baldemar Velasquez gave the latest updates on FLOC’s campaign with Reynolds Tobacco and plans going forward. We shared a meal together and had an opportunity to ask questions and learn more to take back and share with each of our Member Organizations’ constituencies.

NFWM’s unwavering commitment to the workers of FLOC and to their campaign was strengthened again as carloads of our folks followed various FLOC organizers driving along back roads of rural NC to visit tobacco workers who had been out picking tobacco all day. They are here in the U.S. on H2-A agricultural visas and staying in various labor camps working on nearby farms.

At each camp, NFWM representatives had an opportunity to hear about the reality of farm work, the workers’ struggles and sometimes about their reasons for coming to the US. We were able to offer words of solidarity and commitment to those we met. Exchanges like these are invaluable. Hearing from workers’ own voices about why the changes they seek are so important sticks with a person, as is sharing our support with them. Having another person’s face in one’s memory saying “We are so thankful for your hard work” or “Your visit helps so we don’t feel abandoned here” creates a human bond that moves us all forward.

At the meeting, we celebrated three milestones: 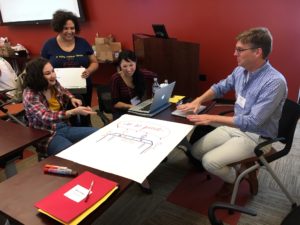 This year, NFWM is undergoing a process of redeveloping our identity design and revamping our communication processes. To that end, we were honored to have Nijmie Dzurinko of RoadMap join us and lead the Board and staff through a small group process. This multi-generational activity brought to light portions of our history that continue to define us today as well as ways young folks interpret and live out NFWM’s work.

As we returned from lunch on Saturday, we received a message from our friends at Familias Unidas por la Justicia that the workers were in process of a walk out of the Sakuma berry fields. The workers said ¡Basta! (Enough!) We deserve a contract.

Together, we watched recorded live videos of workers’ and supporters’ accounts of the day near the berry fields. Once again, the members of FUJ both inspired and overwhelmed us with their strength and courage. Quickly, call-in information was posted on the overhead screen and folks immediately dispersed momentarily to make calls to Sakuma Bros. farms in support of the workers.

Then, from a conference room nearly 3,000 miles away, our group opened our hearts and prayed for the Sakuma workers and their families—sending to them messages of solidarity and hope. You can see those moments here:

Saturday evening, NFWM’s Board hosted a 45th Anniversary Dinner Fundraiser thanks to the generosity of the folks at Pullen Memorial Baptist Church. It was a lovely evening reconnecting with so many long-time friends that we haven’t seen in a while and making new ones, eating delicious food and hearing from engaging speakers. FLOC Member, Rafael Ramos spoke eloquently about the multi-national farm labor system, the importance of the union and the difficult reality of spending more than half the year away from the life and family he’s built. Thanks to the generosity of sponsors, donors and everyone who present, we celebrate exceeding our fundraising goal…45 years and counting!