A Message from Farmworker Justice: 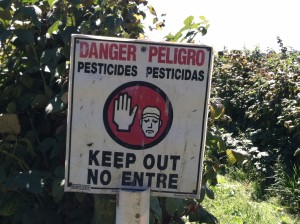 Environmental, health, and farmworker advocacy groups filed an Administrative Objection and a court appeal this week, challenging the Environmental Protection Agency’s (EPA) refusal to quickly correct errors in pesticide registrations and its refusal to immediately implement protective measures to safeguard children from exposure to dangerous pesticides that drift from fields during and after application.

It took EPA more than four years and a court action to provide a response to a request to comply with existing law that requires the agency to protect kids from being exposed to pesticides that drift from fields and orchards. When they did finally respond, they refused the request to take immediate action to protect kids, instead leaving in place decisions and policies they admit are deficient.

“When EPA finally responded, they said that they would comply with the law in their own good time, which means potentially another eight years before mistakes are corrected and protections in place,” said Earthjustice attorney Janette Brimmer. “EPA refused to require even the most minimal buffers around kids’ homes, schools or daycares — and failed to include the margin of safety in its risk calculations that is required by law.”

The agency has long acknowledged that children experience higher levels of pesticide exposure relative to their size than do adults. Officials acknowledged in April that EPA had failed to consider drift in setting pesticide limits, contrary to legal requirements under the Food Quality Protection Act. EPA’s original deadline to complete this work under the Act was 2006. Despite admitting their mistake, EPA declined to implement immediate protections or alter their current plans and plodding timelines, which extend to 2022. Agency officials insist that the current approach to addressing and regulating pesticide drift is good enough. Farmworker and environmental advocacy groups that filed the original petition firmly disagree.

“EPA’s refusal to implement minimal interim protection measures is unconscionable and unsupported,” said Kristin Schafer, Program & Policy Director for Pesticide Action Network, one of the plaintiffs in the suit and objections. “We could not stand by and leave EPA’s tepid response unchallenged.”

The Petitioners have filed an administrative objection with EPA urging the agency to revise its response to impose additional tenfold safety factors on various pesticide registrations while it completes revised risk assessment for children’s potential exposures to pesticide drift. The simultaneous court action on behalf of a subset of the groups seeks an order compelling EPA to immediately implement spray buffers to protect children’s homes, schools, daycares and play areas while EPA is completing the revised risk assessment.

The insecticide chlorpyrifos clearly illustrates the problem with EPA’s assertion that current rules are adequately protective. Recent science has shown that even low levels of exposure to the chemical can harm children’s developing brains and nervous systems—and drift of the pesticide into homes and schools in rural areas is well-documented. Under EPA’s current regulations, this new science will be considered in the chemical review to be completed in several more years.

“We know kids are particularly vulnerable to pesticides in the first seven years of life,” said Erik Nicholson, National Vice-President of the United Farm Workers, another plaintiff. “EPA’s refusal to act means another entire generation of children will be exposed to harmful pesticides—this is both unnecessary and unacceptable. And farmworker children currently bear and will bear the heaviest burden.”

Studies show that farmworker children are not only exposed to pesticides that drift in the air and contaminate the water in rural areas, they also face exposure from residues of the chemicals brought into the home on their parents work clothes and skin.

“The science is clear that children are more susceptible to pesticides,” said Barbara Gottlieb, Director of Environment and Health at Physicians for Social Responsibility. “EPA is aware of that elevated risk and yet—for years—has delayed taking necessary steps to protect children from pesticide drift.”

Farmworker and public health advocates filed a lawsuit in July of 2013, seeking an answer to a petition that the advocates filed with the agency in 2009, urging EPA to set safety standards protecting children who grow up near farms from the harmful effects of pesticide drift. The original petition urged EPA to evaluate the impacts of pesticides on children and adopt interim prohibitions near places where children congregate. In their long-delayed, formal response to plaintiffs, officials refused to take any additional steps to establish protections.

“Five years later and EPA is no closer to protecting children from hazardous pesticide drift,” said Virginia Ruiz, an attorney with Farmworker Justice, also representing plaintiffs in the lawsuit. “It’s time for the Agency to take a stand for children’s health.”

“Rural workers and their families deserve better,” said Della Barnett, Project Director at California Rural Legal Assistance Foundation, a party to the objection to EPA. “We urge EPA to stand with sound science and working families to protect children from a known avenue to dangerous exposure to pesticides.”