On Nafta's 20th anniversary: say NO to the TPP! 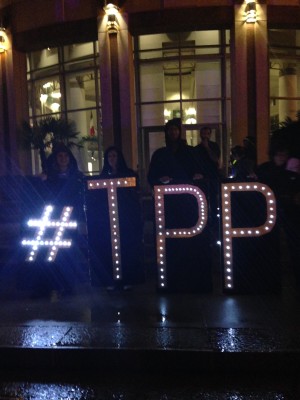 On Friday, January 31st, several YAYA members met up with the Orlando Light Brigade, the Communication Workers of America, Local 3108 and individuals from other organizations, for an awareness event against the Trans-Pacific Partnership (TPP) at the City Hall of Orlando. The timing of the event was of importance, as this day marked the Day of Action Against Free Trade, TPP, and Corporate Globalization as well as the 20th anniversary of the North American Free Trade Agreement (NAFTA). More than 50 actions took place on this day across North America.

For those of who you don’t know, the TPP is a “free-trade” agreement that is aiming to set regulations on non-trade matters such as food safety, Internet freedom, financial regulation, medicine costs, and the environment. The TPP also has a secret negotiation with over 600 official corporate “trade advisors” but has kept the text hidden from members of Congress, governors, state legislators, the press, and the public. Unfortunately, all of what we know about the TPP thus far has been through leaked documents, which means there is still a lot of information that we do not know.

If the TPP were to pass, that would allow corporations an obscene amount of power over basic human rights, and would lead to job losses in the masses, environmental and health deterioration, and the loss of the basic freedoms that our society deserves.

Fast Track Authority is another dangerous part of the discussion around the TPP. If Fast Track were to pass, it would create special rules to allow the White House to negotiate and sign the TPP without any Congressional oversight.

This is why it is extremely important to educate the public about the TPP and Fast Track Authority. If passed, these bills can have a very negative effect over our communities. An Orlando group that has been working on raising awareness about the issue is the Orlando Light Brigade. They rally during the nighttime and use boards that light up to grab the attention of others. For this event, the light boards said “#TPP”.

During the event Brian Luft, a member of YAYA, was of on the speakers that spoke about how the TPP will affect farmworkers and the environment.

Small scale farmers in developing countries will most likely be forced off their lands and left to scavenge for another job ,and even another place to live. Farm workers wages in the United States  will drop, even though most are already paid sub-poverty wages, and the increase of imported fruits and vegetables will make it a difficult for U.S. farmers to compete.

In addition, there will also be much lower food safety standards to govern the food we eat, and higher depletion of the land utilized for this production.

Along with Brian, there were many other speakers that talked about the different ways in which the TPP will affect all of us.

A march around City Hall and up on I-4 followed. Participants chanted things like “Power to the People, Not the Corporations!”We hope that those who heard us educate themselves about the dangers of the TPP and that they eventually join our fight.

Despite the rainy weather I believe that this was a successful event. Some folks stopped and listened and others even came up to us to find out more information. On that note, we must continue to spread the word and fight against the TPP! 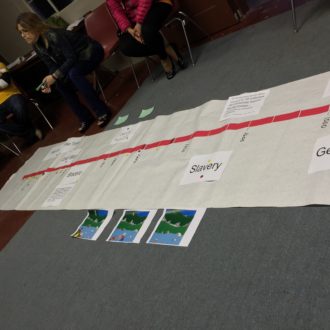 The weekend of November 21, I and two other YAYA’s joined the Florida Immigrant Coalition (FLIC) for their 10th annua... Read More »