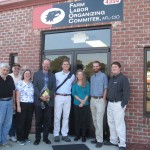 On October 7th,  NFWM led a delegation of religious leaders to North Carolina to visit farm worker labor camps there with staff of the Farm Labor Organizing Committee(FLOC).  Members of the National Council of Churches Justice and Advocacy Commission and representatives of the United Methodist Church and the Alliance of Baptists saw for themselves the deplorable housing conditions that North Carolina farm workers must return to each day.

t with workers from Mexico, Guatemala and Honduras in crowded bedrooms or standing outside. There is no place to receive visitors in the camps these workers call “home” for months or years. Several workers said they hadn’t seen their families in over five years.

These same conditions have been reported by MSNBC, which went to North Carolina to follow

up on the report recently released by Oxfam America & FLOC, “State of Fear: Human Rights Abuses in North Carolina’s Tobacco Industry.” (see article in our News section and find a link there to the report.)