On Saturday, January 19th, seven members of Orlando YAYA met in the morning at the Central Florida Jobs With Justice office to join other community organizations marching together in the Martin Luther King Jr. Day Parade.

YAYAs marched alongside members of the Jobs with Justice Coalition – UNITE HERE local 362, the Central Florida Chapter of the Labor Council for Latin American Advancement, Organize Now, Dream Defenders, the University of Central Florida’s Student Labor Action Project, and the Orlando support system for Puerto Rican political prisoner Oscar Lopez Rivera-  in a large procession through several blocks of downtown Orlando. Some YAYAs carried signs, banners, and puppets in the parade, while others handed candy to the younger spectators and passed out flyers announcing upcoming YAYA events. We chanted as we marched, calling out for workers’ rights, labor reform, and justice. 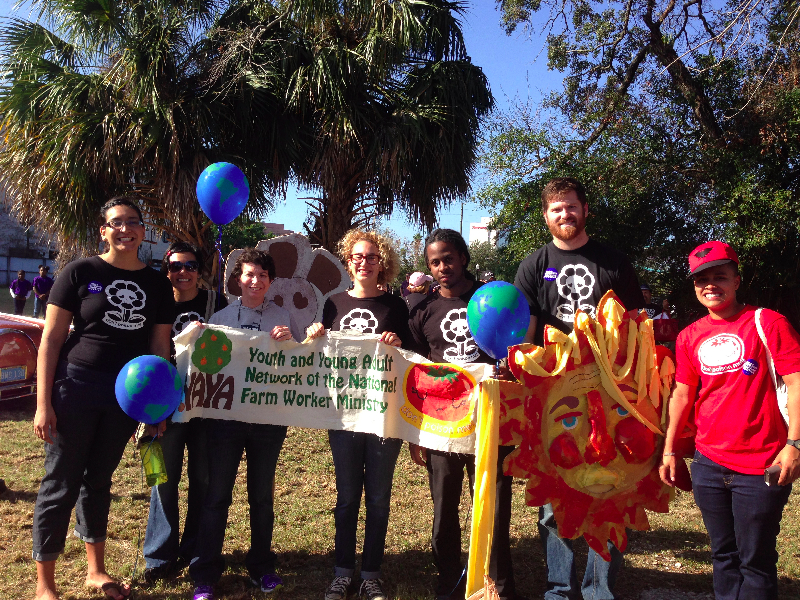 The MLK Parade is organized every year by the City of Orlando to celebrate the Dr. King’s everlasting commitment to peace and justice. “True compassion,” wrote D. King, “is more than just flinging a coin to a beggar. True compassion comes to see that an edifice which produces beggars needs restructuring.”

I see this sentiment reflected in YAYA’s mission and actions as a farm worker solidarity network. In order to work in solidarity, we must do more than just flinging a coin to a beggar. We must do more than simply addressing various symptoms of a problem, as this action is fleeting in its contribution to build a sustainable movement of social change. We must not ignore the larger systemic issues at play, institutionalized into our government, schools, communities, and homes.

YAYA works to address many of the various forms of oppression faced by farm workers, such as classicism, racism, and nationalism. We are committed to combating the root causes of these problems, believing that this method is the only way to create lasting social change. The Martin Luther King Day Parade was a beautiful reminder of where YAYA stands in the movement for social justice.