MPs Gather for Round Table Discussion with FLOC Supporters 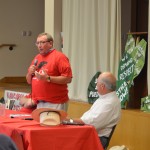 On July 26th Members of British Parliament Ian Lavery and James Sheridan participated in a fact-finding delegation to North Carolina tobacco fields to examine human rights conditions for farm workers.  The delegation of statesmen visited farms in the supply chain of various manufacturers – with particular attention to the supply chains of Reynolds and British American Tobacco – to speak with farm workers about their living and work conditions. Reynolds, the largest tobacco manufacturer in North Carolina, is a major supplier of British American Tobacco, which also owns a major share of the American company. 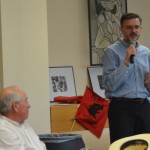 On July 27th, the delegation traveled to Raleigh to meet with farm worker supporters and religious leaders for a round table discussion at Pullen Memorial Baptist Church.  Speaking to nearly 200 supporters, faith leaders, union members and farm workers, the statesmen shared a scathing review of the conditions they had observed the day before.  “We wouldn’t treat animals like this,” said James Sheridan. 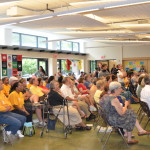 Close to 200 supporters gathered for a round table discussion with members of British Parliament following their visit with NC tobacco farm workers.

North Carolina native, Michael Durbin shared his experience serving as a Church Volunteer Camp Observer organized by the National Farm Worker Ministry and Triangle Friends of Farmworkers.  The Church Volunteer Camp Observer program couples religious and community leaders with FLOC organizers as they meet with workers.  The volunteer observers record any imitation or retaliation happening in the fields or labor camps.  For more information on how to join the CVCO program, please click here. 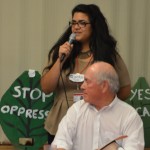 Dave Austin of Eno River Unitarian Universalist Fellowship spoke of the overwhelming support for FLOC and farm worker justice in North Carolina.  Naming the numerous organizations in the room, Austin had practically the whole room standing before he was finished recognizing those who had come to pledge their public support.

FLOC’s summer sign-up campaign and the Church Volunteer Camp Observer program will continue through the end of the season.  FLOC President Baldemar Velasquez assured yesterday’s crowd that more than 1,000 union cards would be signed by the summer’s end.  For more information on FLOC and the Reynolds Tobacco campaign, please visit NFWM.