Jonas vs. Winter Board Meeting 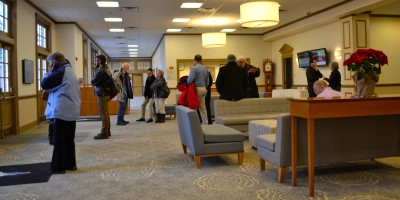 The weekend of January 22nd was suppose to kick-off the National Farm Worker Ministry’s Winter board meeting but Jonas (the storm not our great Development Director, Alex) had other plans. I left out of Orlando on Wednesday, as per usual with these events, to begin setting up for the weekend ahead – pick-ups at the metro and/or airport, grocery runs, and other miscellaneous errands that arise in the midst of organizing such meetings. Upon my late Wednesday evening arrival to Chevy Chase, I was not expecting to see the effects of Jonas so soon. It started to snow on our way to dinner with some of our executive committee board members. I’m not going to lie, I enjoyed seeing such since I am a Florida native and snow hasn’t existed in Miami since the 40s. But did I think it would cause such commotion in the world?? Noooo. And that’s when the phone calls and emails began pouring in from NFWM board members from across country that they were concerned about their Sunday flights being cancelled or airlines warning them to reconsider their trip. Oh no!

By Thursday afternoon almost every Board member, except the ones who were already at the National 4-H center or lived in the DC area, had cancelled their flights. Everyone I was looking forward to seeing would not be coming anymore – Olgha Sandman, Joy Warren, Gabi Ríos, and some new members. I was crushed. The 1 of 2 times a year I get to sit with NFWM staff and our glorious board to talk about the past, present, and future of the farm worker movement. The stories I would be in absence of because of Jonas. While most members of NFWM’s executive committee were meeting all day Thursday, I was doing some minor runs to the grocery store and whatnot. Yet NFWM staff was worried if a quorum would even exist amongst organizational members for Friday’s meeting. We had an important budget to pass! Luckily between the board members present in the DC area and with modern technology aka conference call lines we made the quorum, passed the notes from our summer board meeting, and heard from 5 of NFWM’s farm worker partners.

Friday morning opened up with prayer and reflection of folks who have inspired us in the farm worker movement. Many people were named posthumously and some still with us. Of course I mentioned Susan Alan, Associate Director of NFWM, as someone who continues to inspire me in the farm worker movement through her spirit of solidarity and commitment to the workers and NFWM. Enough of the gushy stuff though. After board approval of some important items, we heard from several organizations working towards farm worker justice. 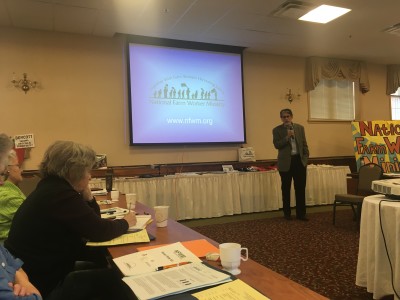 First was Bruce Goldstein of Farmworker Justice, a nonprofit organization seeking to empower seasonal farm workers and migrant workers through improving working and living conditions, immigration status, health and occupational safety. Bruce spoke about Farmworker Justice and noted the EPA ruling (of changing standards for pesticide trainings and the age one can handle pesticides) as a most recent victory. He also spoke to the idea of their being a “shortage” of farm workers in U.S. – this rhetoric has been more and more prominent amongst growers. In fact, there is not a shortage of farm workers in the U.S. but more so, of growers becoming more weary of workers who are organizing for better conditions. Growers (#NotAllGrowers), as well as corporations, want the complacent, quiet workforce that once ruled the agricultural industry. Growers are leaning toward the H2A workforce, which in part calls for higher standards on behalf of growers yet less mobility amongst workers to change farms if those conditions/standards are not met.

Following Bruce we heard from Michael Szpak, AFLCIO strategic campaign coordinator, working alongside the Farm Labor Organizing Committee to advance collective bargaining and freedom of association among tobacco workers. I appreciate Michael for his brief overview of the FLOC campaign with RJ Reynolds/Reynolds American, Inc. and more so, for his accurate account of historical racialized moments in U.S. history that have led to the continued displacement of farm workers. Among a largely white audience, Michael spoke to the fact that white supremacy, the institution and the manifestations of such, have continued the exploitative nature of migrant and seasonal agricultural workers. It is a dire necessity to understand agriculture in this framework because without understanding the Black history of farm labor we cannot move forward to find justice now in an industry largely worked by immigrant, people of color workers. As we move forward in working alongside farm workers I am continually committed to bringing this conversation to the forefront of justice. 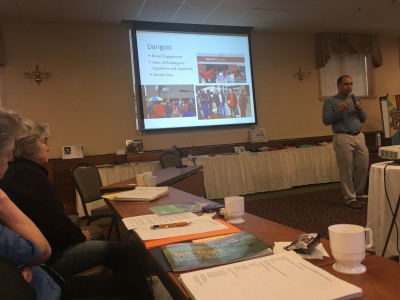 Next we heard from Giev Kashkooli, Political and Legislative director of UFW, who spoke to the accomplishments of collaboration between UFW and NFWM around the Darigold campaign, Gerawan campaign, and exclusions of ag workers in labor laws. Giev spoke to the long withstanding fight with workers to expand union contracts in fields to include health insurance, paid holidays, sick time, and pension plans. All of these are huge wins for UFW workers as they face federal labor law exclusions through the National Labor Relations Act and Fair Labor Standards Act. Though California is one of the only states to include farm workers in statewide labor laws, UFW noted that the enforcement was lacking on workers behalf. NFWM assisted UFW in pressuring CA governor to enforce the new law while workers went on strike in various locations across the state. UFW calls on NFWM and farm worker allies to continue our efforts in supporting them by working on the Gerawan campaign, getting overtime pay to agricultural workers, immigration reform, prevention of heat illnesses, and lastly, the UFW convention which I will be attending with another YAYA later this year. 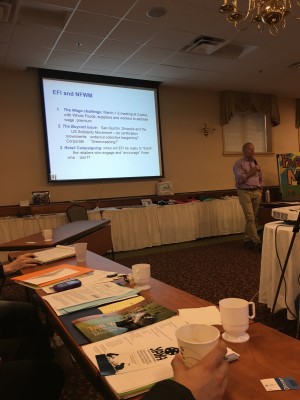 One of my favorite groups to hear from is the Equitable Food Initiative (EFI). Peter O’Driscoll, Poject Manager, spoke to the continued efforts to expand EFI on to other farms across North America. So far, Costco and Bon Appétit have bought into this worker-driven model changing the agriculture industry. Through training workers about pesticides, food borne illness prevention, and labor rights, EFI is leading the pack in putting workers at the table alongside growers, distributors, and corporations. Lastly we had the privilege to hear from Reid Maki, Child Labor Coalition (CLC), about how CLC has been working with farm worker groups to stop child labor in the fields. I believe a more constructive conversation is needed here then just the “children don’t belong in the fields” argument. No child should be forced to work, yet in the situation with children farm workers, the analysis needs to expand as to why children must work alongside their parents. For instance, we, as allies, have to consider that farm worker wages are not high enough for them to single-handedly support their families. This is often the case as to why a lot of kids work with their parents. Inevitably we need wage expansion (among a million other things) to start combating child in the fields. Food for thought. 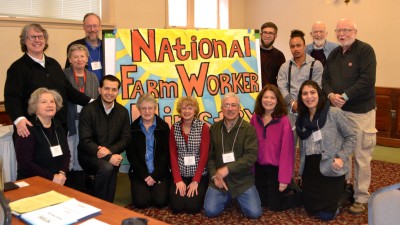 And that’s exactly where our board meeting ended as Jonas closed in on us. As the blizzard fell down on us I was left, once again, with a commitment to NFWM’s mission and values – to continue to strive to be the best ally to farm workers with the direction from our different farm worker partners, the NFWM board, YAYA volunteers, and the other allied organizations we work with. Board meetings have always served as a reenergizer for me – the opportunity to meet new board members, reconnect with seasoned ones, and hear from the farm worker partners who are laying the foundation for justice in their respective farm worker campaigns and communities. Although I didn’t get all these opportunities this time, I was happy to be in a more intimate circle with NFWM staff, Felix, Marilyn, and Sam. I look forward to the summer where I can see the rest of you all! On a sidetone, I learned how to drive in the snow and shoveled by first car out 😀