Yesterday I traveled to a remote farm in north-central North Carolina as part of the National Farm Worker Ministry’s farmworker outreach project. My fellow NFWM workers and I traveled with some ten members of the Eno River Unitarian Universalist Fellowship to pay a visit to a group of migrant Latino men who have been working in the tobacco fields all summer. Our goal in visiting was one of solidarity. Most of us from NFWM and ERUUF have spent time learning about the lives and hardships of migrant workers in the U.S. and, as such, we were eager to dialogue with and befriend members of this group that so often goes unnoticed.

We spent the better part of the afternoon in fellowship at the workers’ house, which was an aged trailer sitting in solitude amongst acres of tobacco crops. My fellow intern Lauren led us all in introductions and ice-breakers. Members of ERUUF provided a lunch replete with ham, macaroni salad, fresh fruit, and ice-cold Pepsi.

It was amazing to watch the evolution of the group as a whole. The social dynamic was at first a little awkward. Obviously there are stark cultural differences between 12 Latino farmworkers (all men ranging in age from 25 to 65) and 12 upper-middle class white Americans. Not to mention, the English-Spanish barrier is always an issue, with around one-half of our group feeling comfortable speaking Spanish. Indeed, being a guest in someone’s house without knowing your host’s native tongue can be an alienating and clumsy experience. Likewise, I could tell the workers were unsure how to engage us, their visitors, who drove up in fancy cars and whose urbane demeanor must have seemed out of place. While we told them we were coming, some of the men confessed they didn’t believe we actually would. It seems that after working alone in the fields day in and day out for years, these men have grown accustomed to isolation and wrestle with abandonment. Naturally, our presence surprised them. We showed up to their trailer, catching them a bit off guard and feeling a bit out of place ourselves. But as anyone who has done service or mission work can attest, the barriers of language and culture can often be conquered with other, more universal, types of communication; specifically, the languages of food and sport.

There is something poignant in the act of breaking bread. Needless to say, this act was made even more profound by our eating on an actual farm (granted, it’s a tobacco farm). The agrarian author Wendell Berry wrote, “Eating is itself an agricultural act.” Chomping on sandwiches and slurping on watermelon did give us pause, as we acknowledged that many of these workers, our new friends, had worked in melon fields before. We sat with these men and gazed into the fields, our backs to the trailer, and we slowly bonded. This connection may have been aided by our communal scrambling for cover once the clouds rolled in and dumped rain on our picnic. Indeed, God broke a lot of the tension by dousing us all with a cold shower. We ran for cover, hair dripping and shoes muddy, and began conversing inside the trailer. I sat down with several workers and we dialogued about everything from linguistics to politics to Oreo crème filling. I found these men to be incredibly patient with my stumbling Spanish and incredibly thoughtful in their responses to my questions. I was especially moved when Jose, who looked no older than my own 25 years, approached me and began a soft monologue in Spanish. He told me how he has been working in North Carolina for three years and has never had a visitor. I said, “C’mon, surely you’ve had visitors!” And he agreed, “Yes, some people have visited us, but they only stay for 30 minutes at a time. We have never had anyone bring us food and stay with us for so long. We normally work all day long six days a week. On Sundays we go to the store and come right back. We have never had anything like this.” I was stunned by his sincerity and candor. At first I thought he was joking. But towards the end of our conversation I could tell he was getting emotional, and all he could say was, “Es un placer” – “It is a pleasure.” I had to reciprocate the emotion.

Perhaps the highlight of the afternoon came when 11-year-old ERUUF attendees Matthew and Adam brought out a soccer ball and an epic game commenced. I was inside the trailer talking to my new worker friends and heard fierce bilingual shouting outside, followed by a climactic shout: “Gol!” I went outside and saw four members of our group and maybe seven of the workers engaged in an intense (though jovial) game of futbol in the gravel lot next to the trailer. Though I’ve never been much of a soccer player myself, I was drawn into the game by the others’ enthusiasm. We played until we were sweaty and satisfied and it was time to leave. As we cleaned up and said our goodbyes, I marveled at the changed that took place within us as a corporate body. During our initial ice-breaker games, the group was segregated, with workers on one side and visitors on the other. But as we formed a circle to share our final thoughts, I noticed how blended the group had become. 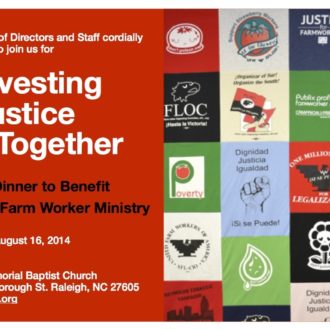 North Carolina Kicks Off the Harvest of Dignity Campaign!

The Farmworker Advocacy Network invites you to a Thanksgiving gathering…   The Harvest of Dignity Cam... Read More »

Please consider joining NFWM-NC at one of these great films! In Durham Harvest of Shame and Harvest of Dignity at the N... Read More »