In support of FLOC 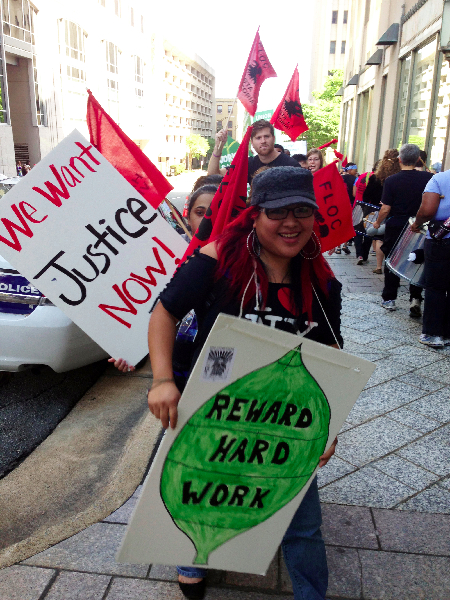 YAYAs traveled to NC as part of a solidarity campaign with the Farm Labor Organizing Committee. FLOC has been targeting RJ Reynolds to use their power in the tobacco industry to create better conditions for farm workers. Workers face poor living conditions, racism, exposure to toxic pesticides, nicotine poisoning, lack of respect and basic human rights, and often live in poverty. These problems exist in the tobacco industry, and as the second largest tobacco company in the United States, RJ Reynolds has the power to change things. YAYAs were responsible for mobilizing nearly 15 members of the community to attend the RJ Reynolds Shareholders meeting.

When we arrived at the RJ Reynolds headquarters, we were given proxy packets and told to go inside. We were to raise points of order in the middle of the meeting about questions from last year’s meeting that were never answered and about extending the 25 minute question and answer session. As the meeting was about to start, the YAYAs joined the 20 members of FLOC already inside. The RJ Reynolds chairperson took the podium and called for the meeting to start, and the point of orders began, one after the other. After the second one, the chairperson said that any points of orders that were questions would be dismissed. Despite his warning, FLOC and YAYA continued to raise points of order. The chairman was visibly frustrated.

During the meeting, it was revealed that RJ Reynolds had begun auditing some of the farms they contract with in North Carolina. The results were presented, along with RJ’s dedication to improve farm worker conditions by donating money to Telemon, an organization that provides social services to farmworkers. It was interesting to see the results of the audits because they contradicted most of the information that FLOC has found; for example, RJ Reynolds reported that 95% of the growers audited provided safe working conditions for workers.

Meanwhile, outside of the Plaza Building, 200 members of various organizations and community groups were picketing in support of FLOC and farm workers. They were chanting and calling RJ Reynolds out for their decision to not speak to FLOC, and to thus support current industry standards of low wages and hazardous working conditions. Their voices collectively echoed off the tall buildings.

During the question and answer sessions, there was a line of 20 people behind the microphone. Each person was given 2 minutes to ask their question. Topics ranged from RJ Reynolds relationship with ALEC to the hiring of undocumented individuals. Most of the questions were handed off to another member of the board, and some of them the chairperson could not answer.

After the meeting, the delegation joined the picket lines for about an hour. We then proceeded to march down the streets of Winston-Salem, with many onlookers peeking out of shop windows or filming with their smartphones. Seeing community support was an amazing experience; many people seemed to give thumbs up or smile at us. The march ended at Lloyd’s Presperterian Church, where we had a rally to support the leaders of various organizations, including FLOC. YAYA’s own Brian Luft gave a quick speech thanking the community organizations for inviting YAYA to participate.

Events like these are important because we need to hold those who continue to exploit farm workers accountable. Despite their audits and reports, RJ Reynolds still did not answer many of FLOC or YAYA’s questions, or seemed to defend groups like ALEC. Audits and PowerPoints are not enough; progress and change need to happen. When all of us have a seat at the table, we will find solutions.

Check out this video from the action!