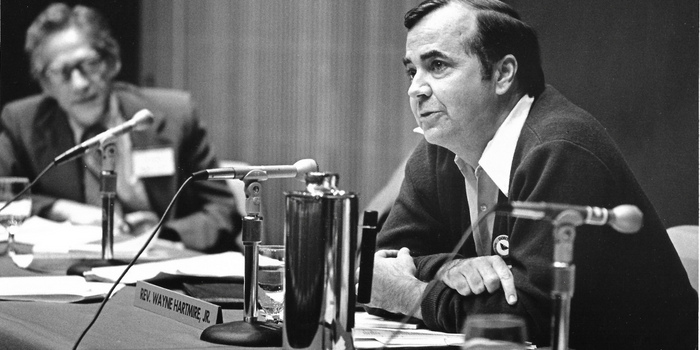 The National Farm Worker Ministry family is sad to announce the passing of Chris Hartmire, our first Executive Director on Sunday, December 18th. The admiration and respect for Reverend Wayne “Chris” Hartmire is a central theme in the NFWM’s history. Chris can only be described as the heart and soul of this organization.

Chris attended Union Theological Seminary in New York City. He worked with young people in East Harlem and later went to jail as a 1961 Freedom Rider in the South. Social justice was in his blood. Chris and his wife, Jane “Pudge” Hartmire, were a team in this work and they had four children: John, Janie Marks, David, and Gordon; and eight grandchildren.

Chris and Pudge moved west in the 1960s when Chris became the leader of the California Migrant Ministry of the National Council of Churches and a close confidant of Cesar Chavez. As the movement grew, so too did the need for organized support from the faith community – and a different kind of support, say those who remember: the farm workers needed solidarity, not charity. 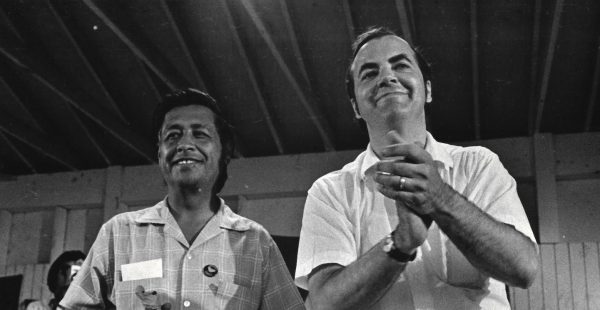 “It was clear that the style of ministry that had been predominating was being ‘kind helpers,’ but Chris understood there needed to be a lot more offered than just helping the poor, which did not change their situation. He was getting his staff trained on community organizing and recognized what a talented organizer Cesar was,” recalls Pat Hoffman when reflecting on the founding of the National Farm Worker Ministry. “He said ‘the Church support network needs to be national or we won’t be able to help them [the farm workers] move into consumer boycotts.’ So that was the movement and the thinking from Chris about why we needed to move from state migrant ministries to a national organization.” People of faith and people in churches needed to support a movement and they did.

When faith leaders and farm worker organizers met in 1970 to establish a national faith-based organization to support farm workers, Chris was asked to take the lead. Chris led the NFWM until the early 1980s when he went to work for Cesar Chavez at the UFW. He turned the reins over to his second in command, Fred Eyster. Chris stayed involved in social justice throughout his life and is credited by many with transitioning the faith community from “service to solidarity” – standing alongside the farm workers fighting for human dignity.

“He was extremely clear about servanthood, about using the resources of the church to serve others,” said Gene Boutilier, a founding NFWM board member. “There are ways in which people align themselves with poor people’s movements that retain arrogance and privilege, and Chris worked hard to overcome that with a lot of honesty and integrity. He knew how to bring resources to the table to benefit farm workers and other poor people without egoism. There was integrity. He was the opposite of “we’re here to help you” – he was “we’re in this together and I’m glad to be helpful where I can and learn from you.’”

Read more about Chris Hartmire in his obituary from the Los Angeles Times. A celebration of life, which will be open to the public, is scheduled for Jan. 28 at 3 p.m. at Pilgrim Place in Claremont, California.

We join with our farm worker partners and friends as we salute the legacy of Rev. Chris Hartmire. Presente 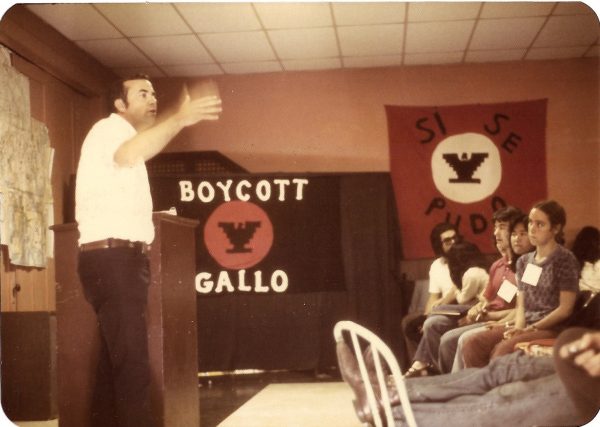 Chris Hartmire was my boss while he headed the California Migrant Ministry, which later became the NFWM. I was based in Corcoran, Kings County during a period that began with staff trying to minister to farm workers with food, clothing, shelter, social services, religious education, handouts, etc. During that period staff was given training in community organization under Fred Ross and Cesar Chavez, ” let the people decide what their needs are”. Guess what! Farm workers wanted what most people want: affordable housing, health care, education for their children, and decent wages. They no longer wanted to migrate, and follow the crops. They wanted to settle down in a community, let their children thrive, and put down roots. After a successful campaign for federal low cost housing, Corcoran and some of its churches no longer wanted to support the CMM. The growers in the churches liked workers to follow the crops and not be responsible for additional taxes for housing, education, and health care. It was a period of transition for farm workers, for the formation of the UFW, and for changing efforts of the NFWM. Chris Hartmire was uniquely qualified to lead the NFWM during this period of transition. His life exemplified social justice, grace, serenity, interpreting the Biblical injunctions to care for one another, welcome the stranger, treat one another with fairness and love.