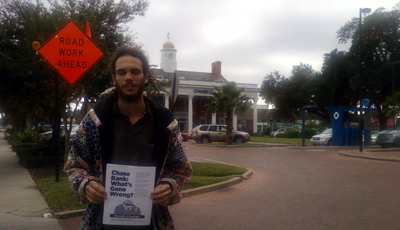 On Dec 10th, YAYAs and supporters from different areas of Florida joined hundreds of protestors who leafleted at their local Chase Banks to educate costumers and the general public about Chase’s irresponsible lending practices.

People are starting to realize the irresponsible behaviors of Chase. A lady gave us a $20 bill as she was leaving the bank, thanking us for the information and asking that we made more copies of the fliers with her donation.

We are sure that Chase will have to do the right thing as we continue to educate others about their practices.

Read more about the campaign demanding that RJ Reynolds meet with farm workers.