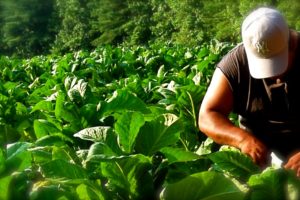 Farm workers in North Carolina, and their families in Mexico who depend on them, need your solidarity.  Please read and sign-on to the attached letter by Thursday, April 20th and let Big Tobacco know that we want retaliation against farm workers who stand up for their rights to STOP.

In 2015, 8 Mexican workers on a NC farm that supplies tobacco leaf to Alliance One International, were blacklisted (barred from future employment) by the Farm Labor Contractor (FLC) who brought them to the farm on guestworker visas.  The farm owner was refusing to pay the farm workers’ fairly earned wages. When, as a group, they complained, the FLC blacklisted them.

Alliance One has the ethical and moral responsibility to make certain these farm workers rights are upheld.

We will deliver the letter with your sign-on to Mr. Sikkel the last week of April. Alliance One, headquartered in Morrisville, NC, is a leading leaf tobacco merchant serving the world’s largest cigarette manufacturers.  Alliance One has the power to affect change all along its supply chain.

These workers depend on doing farm labor in the US to support their families on the wages they earn working the fields of North Carolina. Blacklisting limits their employment opportunities and devastates families.  Blacklisting sows fear among other workers who see that the growers and the labor contractors are getting away with retaliation.

“Please, read the attached letter and sign-on TODAY, and no later than April 20th.

TO SIGN-ON:  Send the information below to NCFaithLettertoAllianceOne@nfwm.org

Organizations listed for identification purposes only.

We are religious leaders from many different faith traditions in North Carolina who share a common belief that all people, regardless of race, creed, country of origin or walk of life, are loved equally by God and deserve to be treated with justice and respect.  In this regard, the social teachings of our faith groups affirm the moral right of farm workers to freedom of association and to bargain collectively without fear of retaliation.

We are writing you out of particular concern for the continued blacklisting of eight tobacco farm workers in the Alliance One supply chain.  These men are all members of the Farm Labor Organizing Committee (FLOC) from rural Mexico. Cristian Raul Jaramillo Avalos, Saul Avalos Blanco, Cristobal Vazquez Chavarria, Jacobo Medrano Espinoza, Cesar Alejandro Sanchez Espinosa, Gustavo Medrano Avalos, Arturo Medrano Avalos, and Hernan Maimiliano Medrano Avalos are all being refused employment by Farm Labor Contractor Jr. Perez in retaliation for exercising their right to freedom of association.

In 2015 these eight FLOC members sought to obtain their fairly earned wages which were being withheld by the grower, Hudson Farms. For their action, they were retaliated against by Farm Labor Contractor Jr. Perez, who continues to deny them employment. These workers depend on doing farm labor in the US to support their families on the wages they earn working the fields of North Carolina. Blacklisting limits their employment opportunities and devastates families.  Further, blacklisting sows fear among other workers who see that the growers and the labor contractors are getting away with retaliation.

We understand that the Alliance One Agricultural Labor Practices (ALP) Code requires that Alliance One leaf suppliers adhere to the Principle of Freedom of Association and collective bargaining. This is the case whether the workers are employed directly by the grower or through a farm labor contractor.  However, the case of the eight blacklisted workers is evidence that your ALP is not working.

In order to effectively address on-going grievances in an atmosphere of mutual cooperation, we call on Alliance One to work with the Farm Labor Organizing Committee to create practical mechanisms to guarantee freedom of association. To accomplish that, we call on Alliance One to provide FLOC with grower contact information now confidential so that FLOC can determine if a grower is covered by the Alliance One ALP when workers bring forward problems, as the eight workers did.

It is in Alliance One’s power to take these steps so that unjust blacklisting, as well as other labor abuses, in your supply chain does not happen again.  We ask you to do what is right.