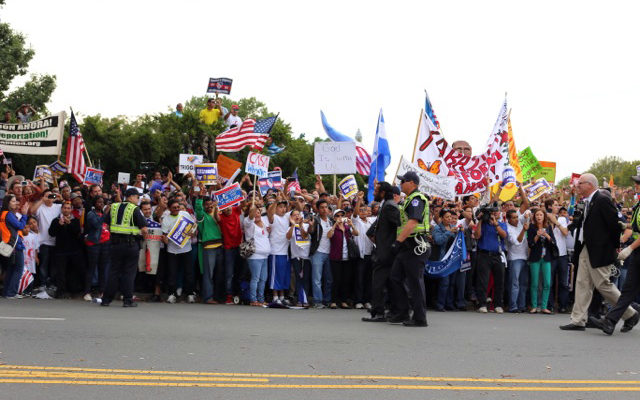 “The fight is never about grapes or lettuce. It is always about people.” 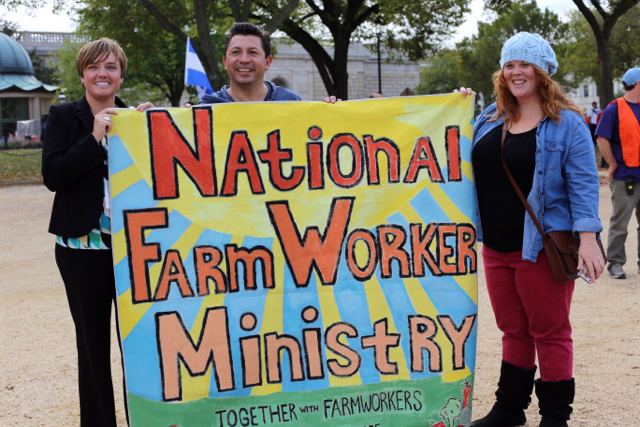 New and old friends of NFWM gather on the National Mall for a photograph.

As I rounded the corner onto the National Mall, I could feel the energy of the crowd as thousands of people made their way to the stage to hear Camino Americano play a benefit concert in support of comprehensive immigration reform. “We’ve waited long enough! The time has come to make immigration reform a reality,” one man yelled into a megaphone. Children paraded onto stage wearing t-shirts that read: My father was deported last year. Help keep families together.

October has been an action-packed month. The office from St. Louis arrived at 112 Cox Ave. in Raleigh, North Carolina on October 5th. While we continue to unpack boxes, we are up and running. Two days after the delivery of our office, I headed to Washington, D.C. to joined 300 faith leaders for the CWS Global Summit on Immigration Reform. The event brought together faith and grassroots leaders to coordinate and strategize about the faith community’s support of immigration reform. Following a press conference on Capitol Hill that Tuesday, I joined NFWM Board member, Rev. Dr. Sharon Stanley-Rea, Director of Refugee and Immigration Ministries and Rev. Dr. Sharon Watkins, President of the Christian Church, Disciples of Christ for a visit at the office of Congressman Paul Ryan. I explained to legislative counsel, Casey Higgins why it is imperative to farm workers that immigration reform include a pathway to citizenship.

Back in North Carolina, two days later, we were volunteering with the Farm Labor Organizing Committee’s 12th Constitutional Convention. Four YAYAs joined our YAYA Coordinator Nico Gumbs for the trip from Florida to North Carolina. It was quite a sight to see nearly 400 FLOC delegates and their families fill the Durham Convention Center as they took part in the democratic passage of 16 resolutions calling for everything from Phillip Morris International to recognize a FLOC collective bargaining agreement to a campaign to sign-up 5,000 new union members in the summer of 2014. Mid-day, volunteers, FLOC delegates, their children and numerous community supporters took to the streets for an immigration march through downtown Durham. FLOC President, Baldemar Velasquez and others delivered rousing speeches to faithful supporters. Chants of Hasta La Victoria! and Immigration Reform Now! rang through the city streets.

Cesar was right. The question of just food is about much more than where we buy our produce or the size and the location of the farm it was grown on. It is also about fair treatment and self-determination for the people so many of us do not see – farm workers. In labor camps far off the beaten road, farm workers and their families are too often out of sight and out of mind. As people of faith, we pull these injustices being done to our neighbor out into the spotlight and demand that justice be done – that a hard day’s work reap a fair day’s pay and that families not continue to be torn apart by an antiqued immigration system. 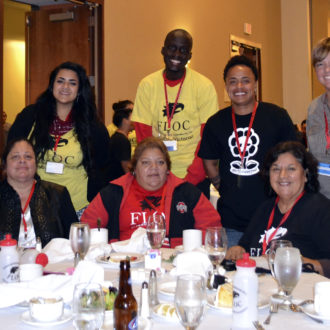 YAYAs enjoying dinner with FLOC members at the 2013 FLOC Convention. 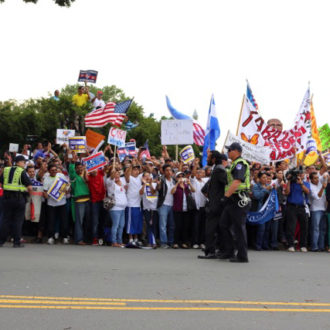