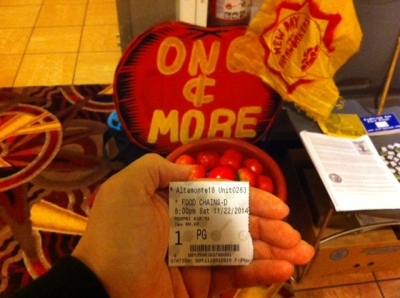 We had a jam packed weekend November 21-23 supporting the Coalition of Immokalee Workers and the “Food Chains” film premiere. “Food Chains” premiered in major cities all across the U.S. to convey the realities for tomato pickers in Florida, how they’ve been organizing to fight back, and how it would affect consumers while barely putting a dent in Publix’s annual profits if they signed onto the Fair Food Program. This film sent a message to consumers everywhere about what we’ve been buying into and how we can work in solidarity to put pressure on Publix to eradicate exploitation in their supply chain. But they don’t want to get with the program and that’s where we come in. Workers, consumers, and students everywhere came together to up the ante with movie screenings, talk-backs, actions, and bombarding social media that Publix couldn’t ignore this time. 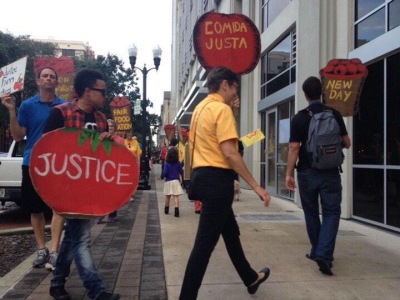 In Orlando, the movie was shown Friday-Sunday, 3 PM and 8 PM at the AMC Altamonte 18. The CIW’s own Julia de la Cruz came to host 2 talk-backs where she was joined by Claire of Interfaith Action and 2 YAYAs which were myself and Gabi Rios. The purpose of this was to have a dialogue with audience members, answer questions, hear reflections, and plug them in locally to take action. The general response to the film was genuine concern and outrage toward Publix who can afford to ensure that workers are paid a living wage for the work that they do. Shopping there was no longer a pleasure for these folks. There was an eagerness to act on their new found knowledge and understanding of whats going on in our food system that we’re all connected to. 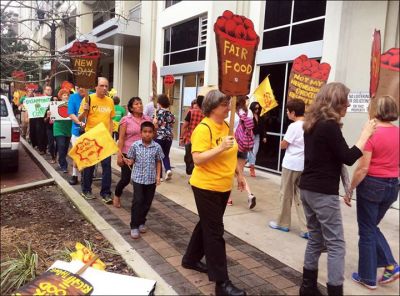 We invited everyone to protest the Publix near Lake Eola on the evening of Sunday, November 23rd. About 50 participants showed up and formed a picket right in front of the store where we caused quite a scene for shoppers and people enjoying the downtown area to take notice. A delegation comprised of the CIW, community members, and faith groups went inside to approach the manager and let them know why we were there. That particular store is no stranger to the CIW and the community’s continued efforts to urge Publix to sign onto the Fair Food Program so the delegation was not met with resistance while the manager at least heard them out. We assured them and everyone in the surrounding area that we’ll be back and continue to do what it takes until farm workers get what they deserve. 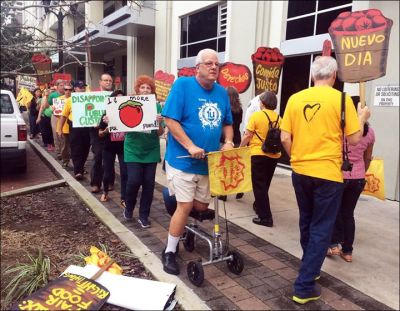 That’s why everyone needs to go see “Food Chains” if they haven’t already! Be sure to take your relatives you tend to get in arguments with at the dinner table during holidays. Remind them that your table full of food is possible because of farm workers.