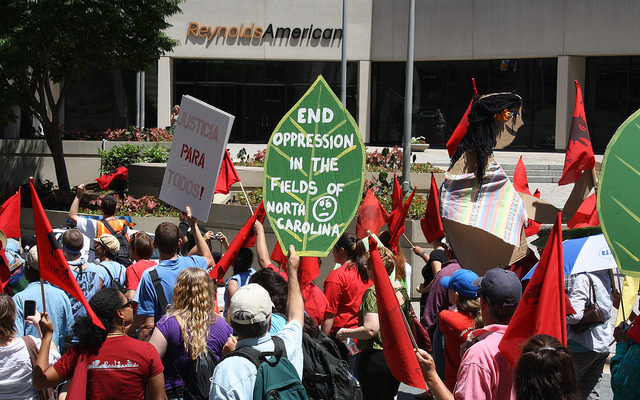 A Message from the Farm Labor Organizing Committee (FLOC):

At the 2013 Constitutional Convention, FLOC members unanimously passed a resolution to continue our efforts to organize tobacco farmworkers in the South by launching an organizing drive to sign up 5,000 new members in the 2014 harvest season.

Farmworkers are standing up and demanding respect on the job, recognition of our union, and a fair and equal wage!

Right now, only a small percentage of farmworkers in North Carolina (around 7,000) are covered by a FLOC union contract. In order to build pressure on the tobacco companies, that have the power to eliminate human rights abuses in their supply chains, we need to build our union’s strength and presence throughout the state.  This will be achieved by adding thousands of new members who are ready to fight for fair and safe living and working conditions.

Summer campaign organizers and FLOC staff are already here in North Carolina visiting camps and talking with workers about the importance of being part of a union, about FLOC’s current campaign for Justice for Tobacco Farmworkers and about how to sign up and join the fight.  Even before the sign-up campaign has really gotten started, nearly 200 workers have signed cards. Summer organizing interns are being trained to join the organizing campaign and once they have finished their training at the end of June, the sign-up campaign will really ramp up.

Voices from the fields:

“The thing I don’t think is fair is when we feel sick [from tobacco sickness] the farmer tells us to rest under a tree for a while.  No doctor, no medical assistance, no nothing.”

“They threaten us.  They say that if we report something they’ll move us [to another farm] or that they won’t give us more work.” 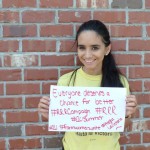