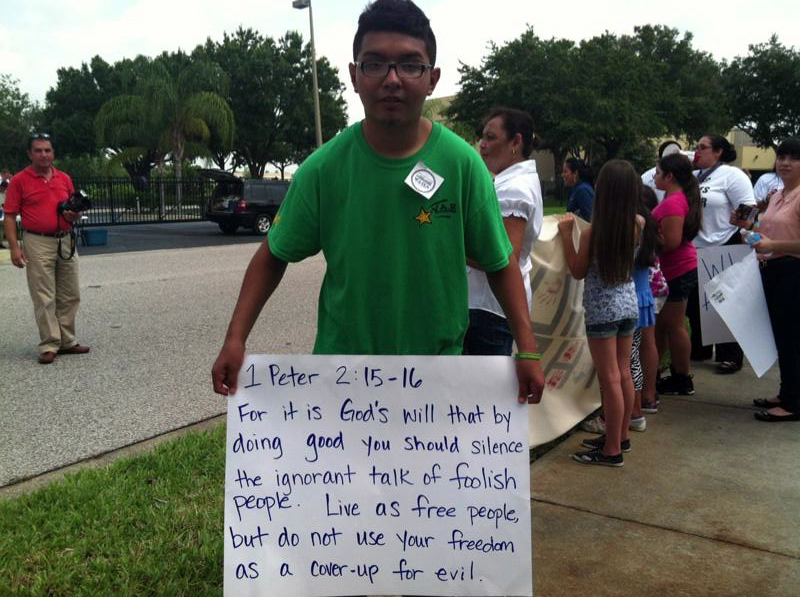 On June 15th, five members of YAYA-NFWM attended a Father’s Day rally in support of immigration reform and to put a halt on all deportations at the Orlando Transitional Center. Community members and organizations from Tampa and Orlando gathered in front of the Orlando Transitional Center to let their voices be known in this fight for immigration reform. Attendees were asked to wear ties to signify the separation of father’s from their families and placing mother’s with the primary responsibility of their children by playing both mother and father.

At the event, we heard from five speakers, including Sister Ann, from the Hope CommUnity Center, who opened up with a prayer. Others shared personal stories of how immigration reform has affected their lives. One story that stuck with me was hearing from the children of Jesus Guevara who have been fighting the deportation of their father for months! These children exemplified so much resilence that day in sharing their story and the importance of immigration reform to them (Read an editorial page written by Jesus’ son).

Such an event, like so many more to come, is important for YAYA-NFWM to take part in because as we strive for justice for farm workers, we know that most of them are undocumented and are facing deportations just like Jesus. YAYA members stand in solidarity with immigrants as fight for a just and humane immigration reform that includes the lives and struggles of families, DREAMers, and farm workers. As the immigration bill progresses through the senate and on to the house, we will be standing there to make sure our friends’ lives, families, and so forth aren’t being compromised.