Can 3 twenty-somethings—with cigars in their mouths and wearing business suits stuffed with pillows—create social change by standing outside a bank holding a banner and passing out fliers in an upscale Florida neighborhood for one hour? Absolutely not.

But can these same 3 people, when placed in the context of simultaneous actions across the country, draw attention to themselves, contribute to public pressure on a major lender, and lead to a conversation between a big tobacco corporation and farm workers, whose working conditions the corporation has the power to determine? Can they help in one tiny way to support these farm workers in their struggle to improve their lives? Maybe. 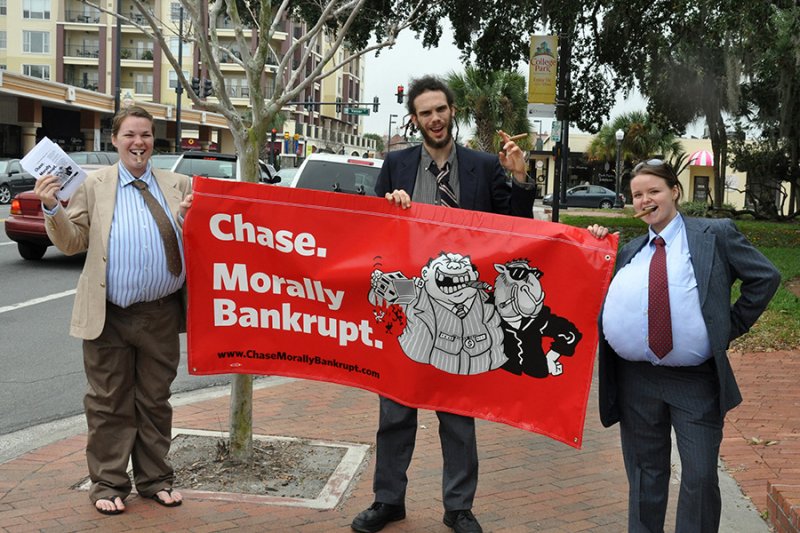 And it was this maybe—this possibility—that led us to participate in the FLOC Day of Action on February 4. Cole and I brought along our friend Lisa. We drank coffee and suited up at Cole’s house, and then drove to the Chase bank on Edgewater Drive in the College Park neighborhood.

We arrived around 11:30 am. We were happy to realize that Albert Park—a public park with a nice gazebo—borders the bank. This public property, along with passing pedestrians, bikers, curious local business owners, and traffic on Edgewater Drive, made it a great location for bannering. Chase customers pulling out of the drive-through had to pass us, and cars stopped at the red light gave us the opportunity to hand out fliers. Our fat banker costumes generated attention and support. 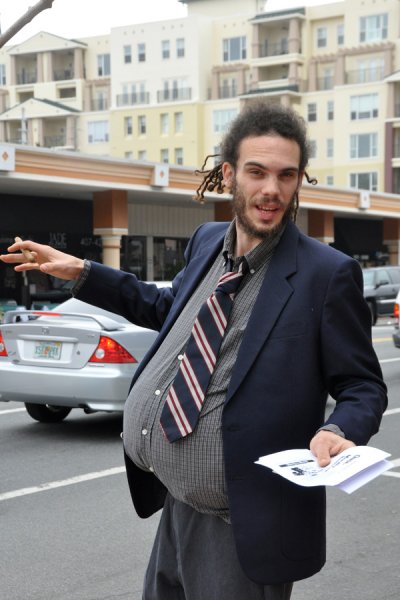 People drove by laughing, waving, honking, smiling, and giving us the thumbs up. Even those who didn’t want to make eye contact would often crack a smile.

We went into the bank around 12:30 pm to talk to a branch manager. She took a leaflet and said she would share it with her district manager, but refused to fax it to Chase HQ. She then told us we had to leave the bank and “go back to where [we] were standing before.” This was positive news, as it meant that the bank employees had noticed our presence but didn’t come to talk to us because we were legally (and peacefully) on public property.

In addition to having a great day creating awareness about farm workers and the unethical behaviors of Chase, we also learned a lesson: a true friend is somebody who will dress up like a fat man and stand outside a bank with you.

(Photos courtesy of Katie Gillett with thanks to Andy Fisher)