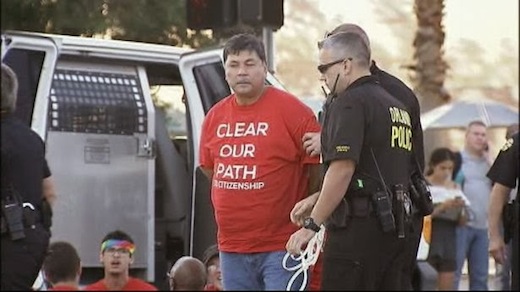 On Tuesday, October 28th, YAYAs and NFWM supporters joined more than 200 individuals, congregated in Orlando, FL, to call on Speaker Boehner to push the immigration reform bill amongst House representatives.

At the end of the mile and a half march, onlookers and participants stopped in front of the Federal Building, where 15 Florida leaders working on immigration reform participated in civil disobedience – of the arrested was the General Coordinator of the Farm Worker Association of Florida (FWAF), Tirso Moreno – blocking off a busy road during rush hour.

Like Tirso and FWAF, many farmworker organizations and their leaders are working to ensure the passage of a comprehensive immigration reform bill that no longer tears apart families and upholds humane labor practices!

Will you join them? Sign this petition put together by the United Farm Workers!

Ask congressman Kevin McCarthy, whose district represents agriculture and the people who pick our crops, to co-sponsor HR15, the House comprehensive immigration bill. As Majority Whip, he is a top Republican leader in Congress and this gives him the ability to influence other Members of Congress.

Farm workers need your support! The time for immigration reform is NOW!