On Friday April 4th, we had a speaker at the Gamache-Koger Theater on Flagler College’s Campus. The lecture lasted from 5:30-7pm. We opened the forum with Lariza Garzon of NFWM’s YAYA network speaking about the farm workers’ struggles here in Florida and the problems with pesticides being used in the fields. She also spoke about the guest worker program Bush is trying to change the rules on, and asked us to sign petitions in favor of having a Cesar Chavez national holiday. 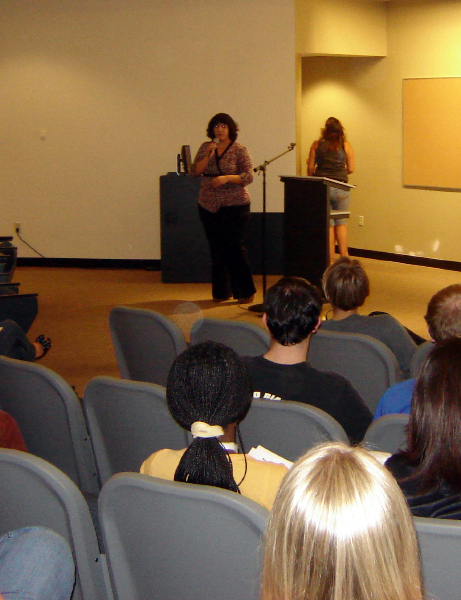 Next Gisele Rodriguez spoke aboutHuman Trafficking. She made a great presentation to over fifty people. She spread awareness to students on our campus about the atrocities going on right now with modern day human slavery. She presented a slide show of pictures from a human trafficking brothel in Florida. We also had the Spanish Club from our campus, OYE!, read some poetry they found that related to issues on Human Trafficking and modern day slavery.

After the forum on Human Trafficking we took a brief break, and then at 8:00pm we screened movies at a local store called Loose Screws where we also set up a table with all of the information and petitions to sign.

Lariza showed us three short films made by farm workers, who are currently working the Farm Worker Association of Florida. We all thought they were great; we came to the realization that for these people it was one of their first times ever using a computer and making a video. Kudos to them!

We also watched some more films from FLOC, that showed the living situations of farmworkers in North Carolina. It showed how these people are living without adequate bathroom facilities, not enough showers for people or toilets and their showers are communal. It is like these people are imprisoned rather than workers. These videos were great, we had people popping their heads in and out the entire time we were screening, so we definitely spread some awareness about the farmworkers plight in Florida. 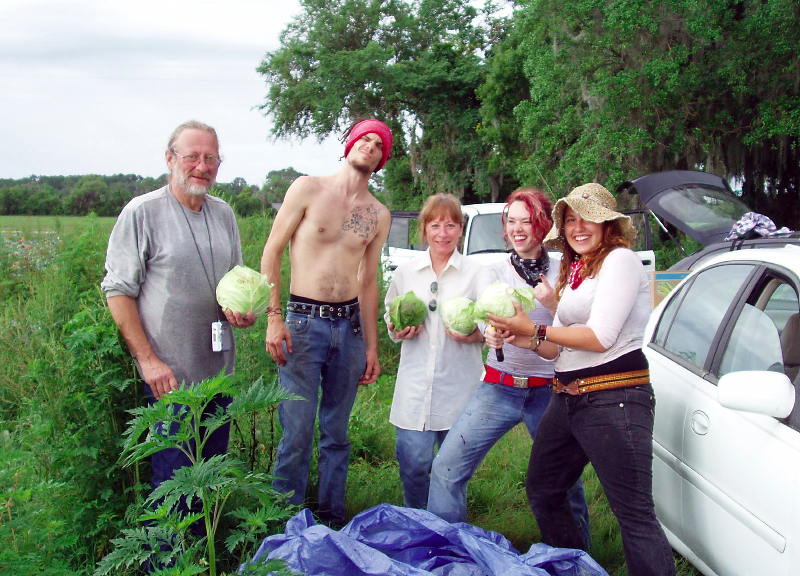 On Sunday April 6th, we had our gleaning project. Five people from St. Augustine woke up at 7:30 in the morning and met out in Hastings at 8:30am. We met up with Sandy, an organizer of the gleaning projects from Jacksonville and she showed us the ropes. We went out to a field that had cabbage, and Sandy told us that she had to ask the farmer not to plow over the field before Sunday, and we almost didn’t even have this field to glean! We all had boxes we took out there to fill, but we filled all of these boxes and then some!

It was an amazing experience. There was so much perfectly good beautiful cabbage to be picked and we barely dented all that could have been picked. We picked for two hours and then the rain set in so we loaded up. We picked over 2,225 pounds of cabbage!!! The most cabbage any of us have seen at one time. We had three cars we took out to the fields and all of them were filled to the brims with cabbage.

When we got back to St. Augustine we donated the cabbage to St. Francis House ( a local homeless shelter), Food Not Bombs in St. Augustine and Jacksonville, a few churches around town, and then to our neighbors and friends! This was a great experience for us to realize what the farmworkers are doing out in the fields each day and to also see how much our society is wasting.