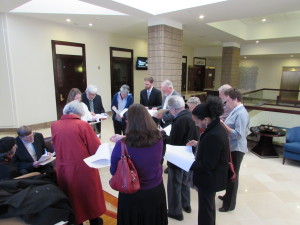 National Farm Worker Ministry (NFWM) national staff, in partnership with the Farm Labor Organizing Committee (FLOC), farm worker support groups and faith organizations, attended the March 13th Pantry Shareholder’s Meeting to give a face to thousands of tobacco farm workers dealing with human rights violations in the fields of Reynolds American tobacco supply chain.  The Pantry, Inc., parent company of Kangaroo Express, is one of several companies who sell Reynolds American tobacco products in their stores and is said to make about 30% of its profits from the sale of tobacco.

Wesley Morris, Minister with the Beloved Community Center in Greensboro, delivered moving words of hope to the Pantry Board with yet another invitation to tour the eastern North Carolina tobacco fields stating, “I have seen the poor living conditions and sickness of people in the field but there are children there and they represent hope.”  Morris asked Pantry to stand for justice for farm workers in their supply chain.  Ryan Nilsen with Durham Friends Meeting echoed Morris’ words also calling on the Pantry to meet with concerned shareholders and tour the fields.

FLOC and their partners, including NFWM, AFL-CIO, Durham Friends Meeting, Triangle Friends of Farmworkers, the Beloved Community Center in Greensboro and others, were looking for answers to questions, many of which have lingered since 2012:  1)  When will a response be made to faith community letters from 2012?  2)  Will the board meet with concerned shareholders and discuss a human rights report proposal presented by AFI-CIO?  3)  When will the board make a commitment to visit the fields and see conditions firsthand?  4)  Will there be open communications to shareholders about interactions between Pantry and Reynolds American concerning human rights violations in the supply chain?

Pantry President and CEO Dennis Hatchell’s responded saying, “We have communicated with tobacco manufacturers about a human rights report and they have assured us that they have addressed the issues brought forth.”  Hatchell also later stated, “We will continue communication with RJR in the future.”

Communication has not been forthcoming from Pantry executives about what transpired between Reynolds American and The Pantry, Inc.  NFWM’s Executive Director Rev. Lindsay C. Comstock publicly asked Pantry to present these communications, a reiteration of a letter NFWM signed in conjunction with the Beloved Community Center in 2012.  Hatchell stated that they would provide shareholders with documentation of their communications. Following the meeting, contact information was exchanged between Rev. Comstock, Briana Kemp, FLOC’s Director of External Affairs and Pantry’s Senior Vice President and Legal Council Thomas Carney.  “We are encouraged by this step on behalf of Pantry executives and eagerly await the promised documents,” said Rev. Comstock.

Reiterating Morris and Nilsen’s message, Kemp also requested that the Pantry meet with concerned shareholders and go to the tobacco fields that ultimately supply cigarettes for their company.  The call for Pantry’s board to see firsthand the deplorable working and living conditions of farm workers in tobacco fields was a topic that all FLOC partners were united around.  Despite years of formal requests, Pantry, Inc. has still not accepted an invitation.  After another request was made at the meeting on Thursday, Hatchell stated that they would take a possible tour under advisement once another formal, written request is submitted.

The Pantry Shareholder’s meeting was indicative of the fact that the prayers, actions outside Kangaroo stores from North Carolina to Florida and letter writing to Pantry managers is finally being heard by Pantry executives.  In turn, NFWM continues to call on faith organizations and farm worker supporters to stand with tobacco farm workers speaking boldly for justice until Reynolds American signs a collective bargaining and freedom of association agreement with FLOC.