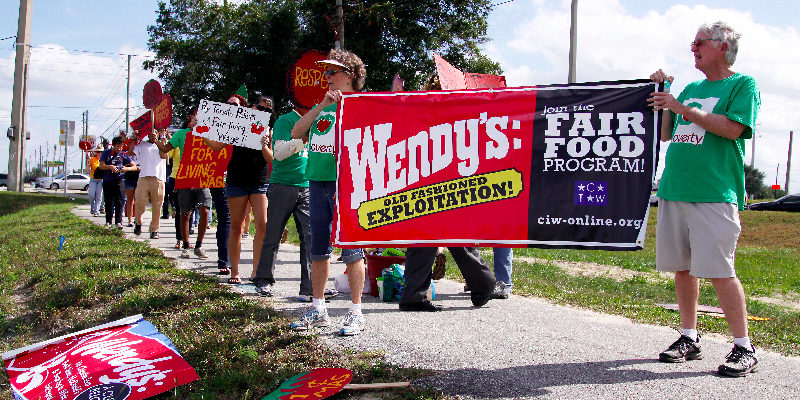 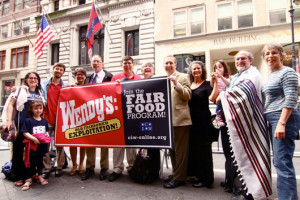 Photo Courtesy of the Coalition of Immokalee Workers

On May 28th, the Coalition of Immokalee Workers (CIW) delivered a letter to Wendy’s CEO Emil Brolick at the annual Wendy’s Shareholders’ Meeting in Dublin, Ohio.  Signed by 22 influential faith leaders and organizations, including Jim Winkler of the National Council of Churches, Gradye Parsons of the Office of the General Assembly of the Presbyterian Church, USA, National Farm Worker Ministry and speaker and author Brian McLaren, the letter called on Wendy’s to “be part of the common good [CIW is] building together as consumers, farmworkers, growers and buyers by joining the Fair Food Program.”

“Mr. Brolick led the way in 2005 as CEO of Taco Bell by being the first corporation to join the Fair Food Nation.  His refusal to join the Fair Food Program as CEO of Wendy’s is confusing to consumers and frustrating to faith-based human rights advocates,” said Rev. Lindsay Comstock, Executive Director of National Farm Worker Ministry.

In the weeks prior to the Wendy’s Shareholders’ Meeting in Ohio, T’ruah: the Rabbinic Call for Human Rights visited Immokalee to learn of the realities for tomato pickers in Florida.  Upon their return home, Rabbi Rachel Kahn-Troster published a letter from over 40 rabbis to Wendy’s Board Chairman Nelson Peltz.

“As Jews and religious leaders, we believe that our faith calls on us to work for justice. The Torah insists that every human being is a creation in the image of God, who therefore deserves to be treated with dignity and honor. The Jewish laws governing relationships between employers and workers mandate paying a fair wage and protecting workers from danger. And our collective narrative of slavery and liberation obligates us to end slavery in our own time.”

At current, 12 corporations have joined the Fair Food Program.  Similar pressure is being put on Florida-based, Publix Supermarkets, the 8th largest privately owned corporation in the U.S.  For more information on the Coalition of Immokalee Workers’ Fair Food Program, click here.