On September 15, 2011, Orlando YAYA members Nicole Godreau, Leslie Cordero and I piled into a car with NFWM staff Bert Perry to make the 3.5 hour drive to Immokalee, FL for the 2011 Fair Food Summit with the Coalition of Immokalee Workers (CIW) and the Student/Farmworker Alliance (SFA). 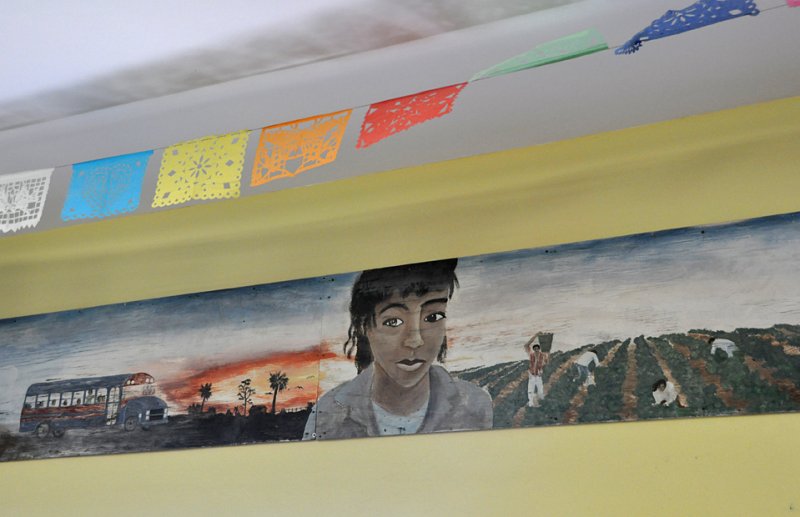 Mural on the wall of the CIW's office

The summit was a weekend of inspiration, planning, and action surrounding the CIW’s supermarket campaign. It was also a forum for meeting CIW supporters from across the country, from Oakland to Brooklyn and many places in between. Unlike “encuentros” in the past, this summit aimed to bring together not just students and youth organizers, but faith and labor allies as well.

I was especially excited for this weekend because it was my first trip to Immokalee! YAYA has been supporting the CIW’s campaigns for years. This year, we have organized a presentation at UCF, picketed outside stores, mobilized 50 supporters to attend the “Do the Right Thing!” march in Tampa, participated in an action at a Publix grand opening, and biked to Publix headquarters in Lakeland in support of the Campaign for Fair Food. Having the opportunity to get to know this organization better, on their own turf, gave me a deeper appreciation for the amount of care and thought that goes into the work the Coalition is doing, a closer look at why that work is necessary, and a context for conceptualizing our own work as allies. 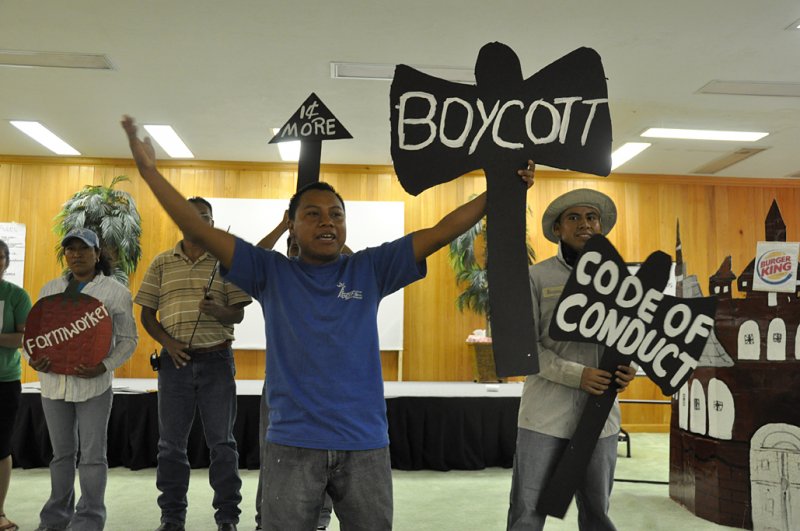 After some introductions the first night, we began the next day watching members of the CIW perform a theater piece they had written. The piece humorously told the story of how they began organizing and reached the agreements they have signed with Taco Bell, Subway, Burger King, McDonald’s, Aramark, Sodexo, and Whole Foods, in a larger campaign that has coalesced as the Campaign for Fair Food.

The Campaign for Fair Food has two main components: an economic component and a code of conduct. In terms of wages, the Fair Food campaign asks corporations to agree to pay one penny more per pound of tomatoes, which is distributed by the CIW to workers’ paychecks. As of last season, the penny has begun passing through to workers. For me, seeing an actual paycheck projected on the wall, with corporations’ contributions listed as line items, was powerful. It was something tangible that I could relate to. 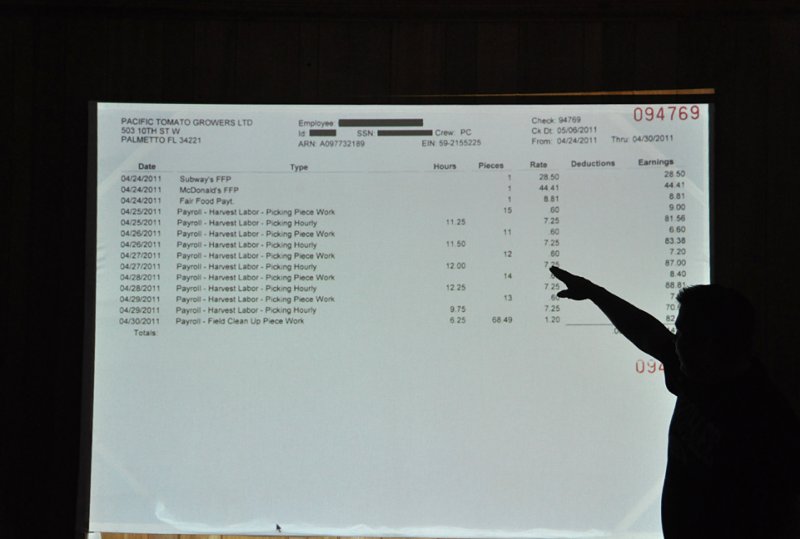 The other component of the agreement is the Code of Conduct that the CIW is beginning to implement in the fields.

Cool Things about the Code of Conduct:

Of course, there is a long way to go in changing deeply ingrained behaviors on the sides of both the employers/supervisors and the workers, but this Code of Conduct is a start. The CIW explained it through the metaphor of “cleaning the pipes”: implementing new ways of doing things is like turning on a tap that’s been turned off for awhile. At first the water that comes out might be discolored, but in time it will clear up and begin to flow better. 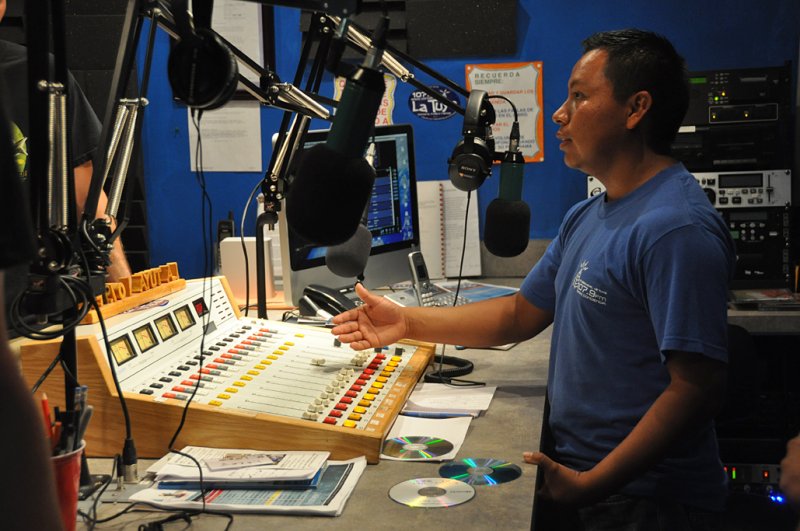 WCIW "Radio Conciencia" in Immokalee broadcasts from the CIW's office

Later that weekend, we took a short walking tour of Immokalee to see where the CIW broadcasts their community radio station, trailers where farm workers live, and the parking lot where they line up to board buses to the fields. We also attended workshops on media and messaging, strategized and brainstormed actions (the Supermarket Week of Action, which YAYA later participated in, came out of these discussions), and participated in a picket line outside of a Publix in nearby Ft. Myers. 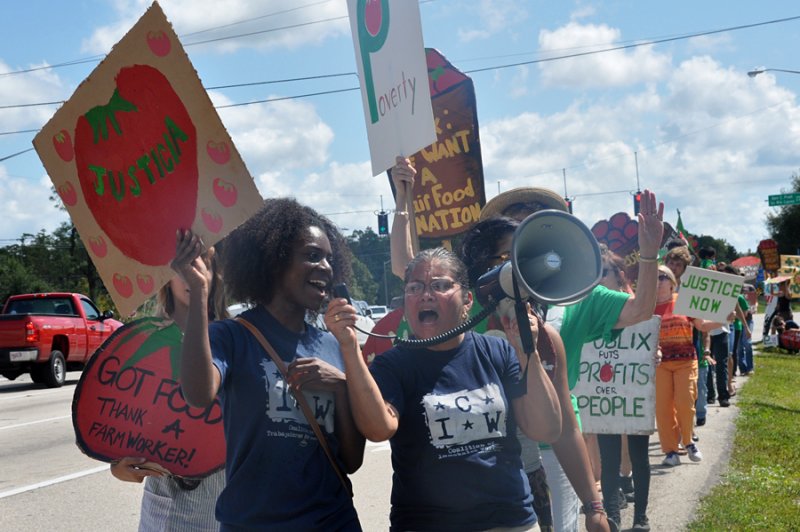 Tiffany, our awesome roommate during the summit, and Nelly, a CIW organizer, lead the picket line outside Publix in Ft. Myers

On the last night of the summit, I turned 25 as the clock struck midnight during a sweaty dance party (a new year of life coming in the same way I hope to leave one day!). Overall, I think the weekend was enlightening and enlivening- YAYA will be walking away with new energy to hold our favorite local corporate target accountable to the human beings in its supply chain. 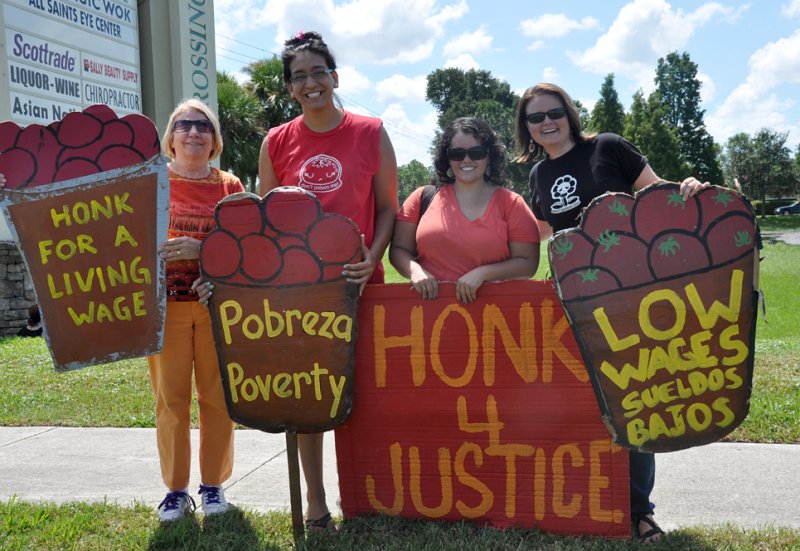 Signing off with a big thank you to the members of the Coalition of Immokalee Workers for taking the time to engage with us, to SFA for coordinating all the logistics, and to all the people who made this a great experience!