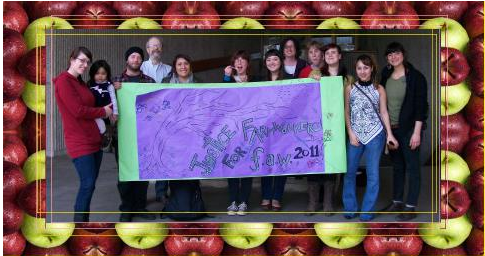 On March 31st at TESC (the evergreen state college) YAYA held a panel discussion with Bridges Not Walls (BNW) and Mason County Literacy (MCL) and movie screening of Viva la Causa. Co-sponsoring the event, the academic program Public Health, Education and Sustainability was in attendance, as well as the Center for Community Based Learning and Action, and Day of Absence/Day of Presence Committee.  Opening the event, local Chicana poet Fabiola Romero read poems for the crowd that drew upon her childhood as a migrant worker and her experiences and memories of Michoacan where she was born.  Panelists discussed the struggles that face farmworker and immigrant communities in Washington, shared their personal connections to their work, histories of systemic oppression and the organizing efforts that their groups are engaging in to resist and defy these injustices.  We had a crowd of about 50 people, raised awareness about future organizing efforts, and engaged students in a dialogue that countered the anti-immigrant vitriol we have witnessed in mass media as well as our own communities.  Moving into spring, YAYA plans to stand with immigrants and farmworkers in their fight for justice by facilitating a workshop on ICE activity in Washington and how we can stand with immigrant communities and working with BNW on the monthly Solidarity Vigils at the Northwest Detention Center in Tacoma.

This event was part of Farm Worker Awareness Week!