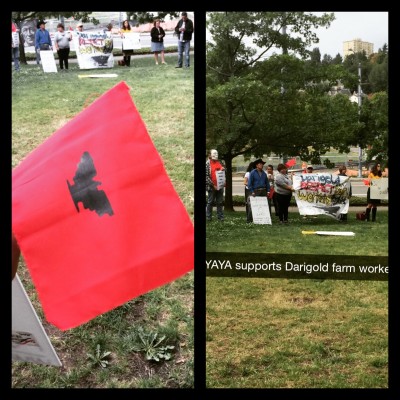 “Is it too much to ask for a simple dialogue to save farm worker’s lives?” Indira Trejo asked reporters as I and about 50 other farm worker advocates stood outside of Darigold headquarters on Wednesday, September 2.

Trejo, a UFW organizer, was referring to the 38,000 signatures the UFW and other advocates collected, petitioning Darigold officials to engage in a dialogue with farmworkers and farmworker advocates to improve the safety and working conditions on Darigold farms.

The petitions came in light of Randy Vasquez’, 27, recent tragic death, which farm workers and others say could have been avoided had Darigold met basic safety requirements for workplaces. In fact, according to the Washington Labor and Industries Department, Darigold is responsible for $6,800 worth of  “serious” safety violations. Violations marked as “serious” are those controllable hazards that are likely to cause injury or death.

Still, when we tried to meet with Darigold officials, we were met with nothing more than closed–locked–doors and dismissal. As we stood outside darigold headquarters, hoping to speak with someone, or at the very least to drop off the petitions, we began making calls.

“Darigold appreciates your call,” the operator said at the other end of my line, “You are 9th in line.”

As we waited, we heard from various allies and advocates in Seattle, from Familias Unidas por la Justicia to Seattle’s Raging Grannies, all of whom mourned the death of Randy Vasquez and the ongoing plight of Dairy farm workers. Dairy work injury rates run 50% higher than rates in other private industry jobs.

State Rep, Brady Rakinshaw was also present, and promised to push for better safety regulations in the upcoming year, claiming that Washington’s workplace injury rates are higher than those of other states.

“Why can’t you people understand that we don’t want any part of this!?” an operator shouted at me when I finally got someone on the line.

The lagoon where Randy essentially drowned in cow manure was cited for these “serious” violations:

Other violations that Dairy farm workers report include:

I think so many of us staring at those closed doors, watching darigold workers step over us to get inside while refusing to take our petitions, wondered, along with Indira, is it really too much to ask for a simple dialogue that could save farm worker’s lives?