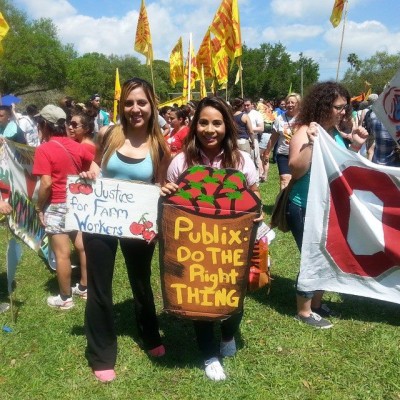 Growing up as the child of migrant and seasonal farm workers was one of the most difficult challenges I have ever had to overcome in my life. I was born in North Carolina to Mexican immigrant parents who worked from June to November in tobacco, cotton, sweet potato, cucumber, tomato fields, and citrus in different communities across North Carolina. Once the month of November arrived we packed all our things and left to Florida. The orange season was starting there. It is not easy moving from town to town, facing substandard housing; from enrolling in school after school, many not welcoming; and lacking a place and community of your own. A sense of home was nearly impossible since I did not even have an actual bed frame; the less we had the better since we were going to move again anyway.

In my opinion, my parents were always paid unfairly. That is one of the main seasons I decided to participate as an advocate in the massive parade and concert for the Fair Food hosted by the Coalition of Immokalee Workers on March 21, 2015. I got invited to attend this event by Youth & Young Adult Network of the National Farm Worker Ministry (YAYA). I just recently became a member of YAYA. As we arrived in St. Petersburg, Florida, where the parade was going to start, I was shocked by the amount of people that were participating. It reminded me of Cesar Chavez and Dolores Huerta!!! Everyone had signs, flags; people were even singing and dancing. 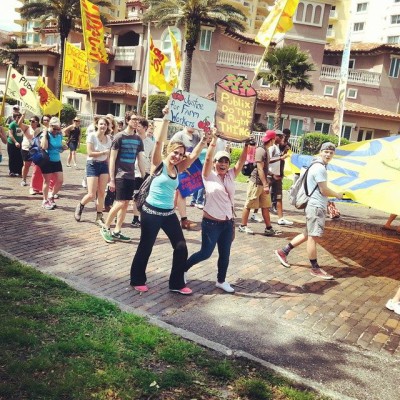 We started marching in the streets of St. Petersburg. As we marched I felt that I was making a difference and taking our demand for human rights in the fields to two of the largest food industry companies still refusing to join the Fair Food Program, Publix and Wendy’s. We were singing songs that inspired and lifted our spirits as we marched in the streets of St. Petersburg for 3-miles.

As I was walking I have to admit, I started complaining about how sunny it was to my friend. My shoulders started to hurt and my face was red like a tomato. That’s when it hit me!!! I was complaining about being in the sun for about 2 hours. Farm workers spend an average of 8 to 12 hours in the sun DAILY and don’t even get paid fairly! Thinking about this made me sing and chant louder. As we marched, the people of St, Petersburg were very warm and supportive. They would smile at us and even applause as we walked. People would drop what they were doing to line along the street to greet us and take pictures of us. 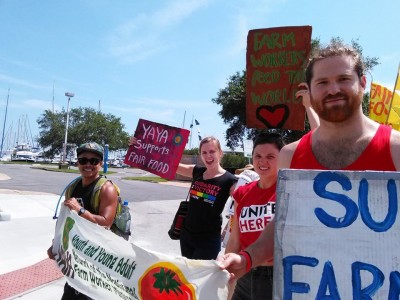 We finally arrived in Vinoy Park. That’s where the Concert for Fair Food was going to take place. We first heard Son Solidario. I love live music!!!! So it was very nice being able to enjoy their music. Finally the moment I had been waiting for arrived. It was La Santa Cecilia!!! The connection between the crowd and the members of La Santa Cecilia, who have made the fight for a fair immigration policy a centerpiece of their music and public presence, was palpable, on and off the stage. I couldn’t resist and started dancing.
As I was on the bus, on my way back to Orlando, Florida I knew this was going to be a day to remember. I started to think about my family and all those farm workers in my community. All those farm worker that feel that they don’t have a voice. I was their voice for that day and I felt like I had made a difference. SI SE PUEDE!