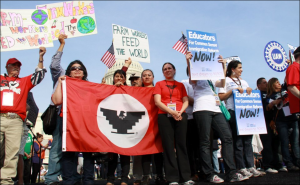 Photo courtesy of the UFW Foundation

The great majority of farm workers who harvest the food we enjoy daily and who are the backbone of our multi- billion dollar agricultural industry, lack legal status in this country.

In the fields, labor camps, and rural towns across the country, NFWM Staff and Board members have met many of these workers. Some live in crowded, bug infested labor camps, lacking clean sanitary facilities or safe drinking water; some have been cheated out of minimum wage; some have endured sexual harassment, some sprayed with toxic pesticides — all afraid to speak up for fear of firing or deportation.

We have met men and women who came here for work so they could provide food and shelter for their families in their home countries – yet haven’t seen those families for years due to the risk of crossing the border. We have met the families of workers who have died in the fields from heat stress, only returning home to be buried.

It is a moral travesty which has reached such crisis proportions, in agricultural labor and beyond, that we now have the best opportunity in years to remedy it. Senate Bill 744, the Border Security, Economic Opportunity and Immigration Modernization Act, was introduced on April 17, 2013 by a bi-partisan group of Senators to reform the nation’s broken immigration system; an amended version of the bill was passed in the Senate in June.

The bill followed a compromise agreement reached by agribusiness representatives and the United Farm Workers (UFW) in consultation with other farm worker organizations. If enacted, it will provide hundreds of thousands of farm workers and their immediate family members the opportunity to achieve permanent residency and eventual citizenship. The farm workers’ path to legal status is faster than other immigrants in order to provide immediate stabilization of the farm labor workforce.

The bill would also phase out the current H2-A guest worker program and replace it with a new 3-year visa with opportunities for workers to go back and forth to their home countries, as well as switch employers here in the U.S. Under the new program, guest workers would be provided, for the first time, with the protections of the Migrant and Seasonal Agricultural Worker Protection Act. And, the bill contains critical provisions for all guest workers which address corrupt recruitment issues, providing for increased regulation and oversight of international labor recruiters.

Click here for a more detailed summary of the ag provisions of S. 744

NFWM in D.C. with the Farm Workers

Just prior to the bill’s introduction, NFWM was proud to work with the United Farm Worker Foundation, assisting with food and housing for over one hundred farm workers and family members who came from across the country to Washington, DC to share their stories with legislators. NFWM Board members in the DC area provided space for meals, meetings and sleeping; volunteers organized by NFWM staff provided over 600 meals for the group. Administration officials from the White House and the US Department of Agriculture welcomed the group and affirmed the importance of this issue. On the concluding day of the DC visit, the farm workers joined tens of thousands of others in a rally on the Capitol lawn.

Immigration reform legislation is a number one priority for the White House, as well as for faith leaders and others across the country. While we recognize that this bill doesn’t live up fully to our biblical mandate to “welcome the stranger” or to “love our neighbor as ourselves”, it is a critical step to enabling hundreds of thousands to live and work in this country without fear, and to ending the separation of families that plagues our consciences. Attention has now turned to the House of Representatives.