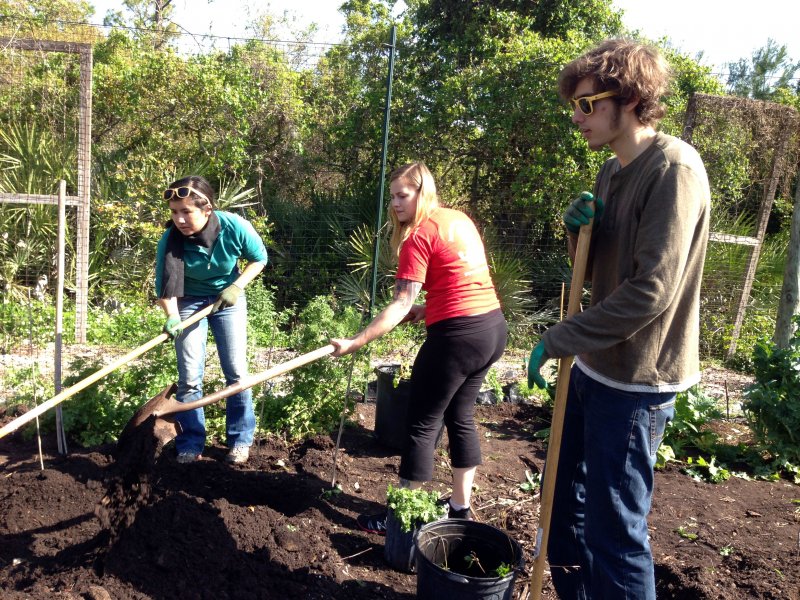 On Tuesday, March 26 from 9-11AM, three members of YAYA and nine other people attended a workshop in the community garden run by the University of Central Florida’s Arboretum. This workshop, co-hosted by YAYA, the Farm Worker Association of Florida-Apopka, and the UCF Arboretum, was part of a week-long celebration of National Farmworker Awareness Week (NFAW). NFAW is a national week of action for students and community members to raise awareness about farm worker issues on their campuses and in their communities. The goal of this workshop was to expose the interconnections between the community gardening movement and the farm worker movement.

After signing safety waivers and selecting work gloves in the Arboretum office, the group headed out to the garden. We took a tour of the garden, seeing all of the different plots of crops, before working for an hour and fifteen minutes. Participants turned and airated soil, pulled weeds, formed new rows, and picked carrots, green onions, kale, cilantro, and papayas. We were even allowed to bring some of the produce home with us!

After this we picked up all of the gloves, shovels, rakes, and hoes and headed back to the office. We regrouped on the porch and for the last thirty minutes of the event, myself and Chris Dudding from FWAF-Apopka led a workshop discussion on how local community gardens act as both an alternative to large Agri-Business, and as a way to show how the ability to yield food from the earth is a skilled labor. We also discussed the drastic differences between gardening and farm workeing in terms of the physical toll it takes on the body. Farm work requires exhaustive and repetitive movements that, over time, have irreparable effects on the body. We discussed many other dangers of farm working, such as pesticide and heat exposure.

We explained how, by joining in community garden projects such as the garden at the UCF Arboretum, people are ALREADY participating in the farm worker movement. Attendees were then told many other ways to become involved, through means such as spreading community awareness of farm worker issues and asking representatives to support Immigration Reform with a pathway to citizenship. YAYA is so proud of our Orlando community, and all of the ways that they continue to join us in our support of farm works.