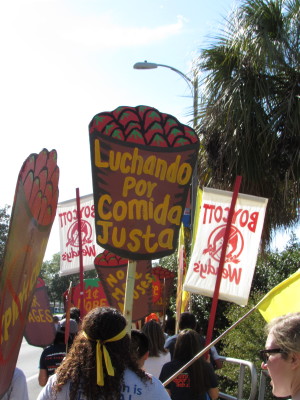 Spring always welcomes a whirlwind of preparations for the year – taxes, March madness, and the after Christmas credit card payments. For YAYA-NFWM, we are met with our own March Madness in support of farm workers. There are events ranging from the large CIW action to National Farmworker Awareness Week (NFAW) to our annual Hit the Field for Farm Worker Justice soccer game fundraiser. And all of our planning starts in late January when we outreach to the Orlando community in regards to the CIW action.

The Coalition of Immokalee Workers (CIW) came to Orlando after the Valentine’s Day weekend to outreach to students, faith allies, and community members to talk about the upcoming Workers’ Voice Tour set to take off on March 2nd from Immokalee and travel up to NYC, Columbus, Lexington, Nashville, Gainesville, and end in West Palm Beach. CIW member, Lupe Gonzalo, and AFF staff, Daniel and Carmen conducted about 20 presentations to discuss the upcoming tour and the shift in focus being primarily on Wendy’s this year. We spent 2 weeks talking to different people about the tour; it’s purpose and the mass mobilization for the final stop of the tour in West Palm Beach. 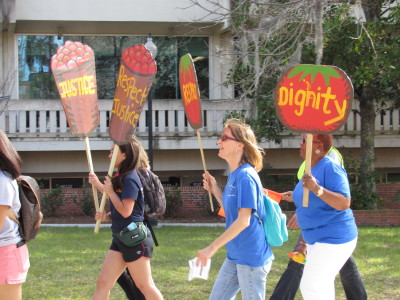 The focus on Wendy’s this year comes as no surprise as the campaign comes into its 3rd year. Being the last of the 5 major fast food retailers to sign on to the Fair Food Program (FFP), Wendy’s is evading the proven program by importing it’s tomatoes from Mexico and not only that, but they recently released a Code of Conduct for their supply chain in which their suppliers are suppose to follow. Yet the issue with this new Code of Conduct is that
it’s empty – there are no enforcement mechanisms whatsoever to hold these suppliers accountable. Lastly, by circumventing the FFP and getting their tomatoes from Mexico, Wendy’s is benefiting from the exploitation of farm labor while other fast food retailers, such as McDonald’s, Subway, Burger King, have already bought into.
As March closed in and the Workers Voice Tour kicked off, us Floridians followed from afar watching the tour updates through the various social media outlets. On March 2nd in NYC the CIW announced a national boycott of Wendy’s to continue the pressure for them to sign the FFP. It wasn’t until this past Friday that YAYAs joined up with the caravan in Gainesville. The second to the last stop was at the University of Florida where there is a Wendy’s on campus. Over 80 people gathered at Norman Field in Gainesville to march through UF’s campus and deliver a letter to the manager on duty. Students, people of faith, and allies from across the country joined in as we marched and chanted, “Boycott, Wendy’s” throughout the streets. Following the march a small delegation of students and CIW members went to deliver a letter to the manager to declare the boycott of Wendy’s. Afterwards local students performed a theatro for community members on the realities farm workers face – early mornings, low pay, and slave-like conditions in the fields. But this was only the beginning of YAYA-NFWM’s CIW-filled weekend. 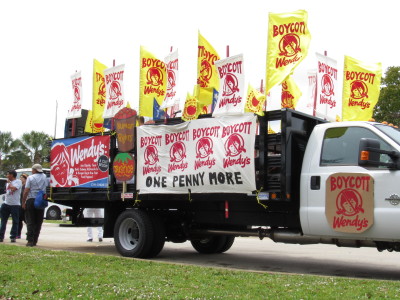 YAYA alongside First Unitarian (1U) and University Unitarian Universality Society (UUUS) organized for a bus to take participants down to the finale on Saturday, March 12th, in West Palm Beach. About 40 farm worker allies hopped on the Orlando bus at 9AM to head south. Folks from both Unitarian congregations, Timber Creek High School students, Student Labor Action Project – UCF, YAYAs, and Rollins students all came out in full support of the CIW. Upon our arrival in West Palm we met up with some of our South Florida YAYAs (Bianka Salomon and Dominque Auliso) and talked among the different allies who traveled from across the U.S. to participate. Ileana Roque Gonzalez, YAYA member and SFA steering committee member, spoke to the crowd about her involvement with the farm worker movement while paying homage to YAYA-NFWM while others waited for the march to take off. Various local and national media outlets were interviewing me about our purpose for the Wendy’s boycott and the effects on farm workers. You can check out a short clip from the local West Palm Beach NBC here!

Around 2PM the march finally took off from Howard Community Center! It was a beautiful spectacle to see over 600 people gathered through the streets of West Palm Beach for a peaceful, nonviolent protest! As we crossed the bridge onto the island of Palm Beach we were met with warm and welcoming people. The visibility of the march through a rather expensive outdoor shopping area was amazing. People literally stopped shopping as our voices roared and reverberated through the small shops on the island. I spoke to many Palm Beach snowbirds who were very receptive to our message and promised to not eat at Wendy’s until the FFP was signed. After a nearly 3-mile march it ended on the intercostal with a rally of good music and dancing. Once again, highlighting the animo ever so present with the CIW (even after 10 days traveling across the east cost)! 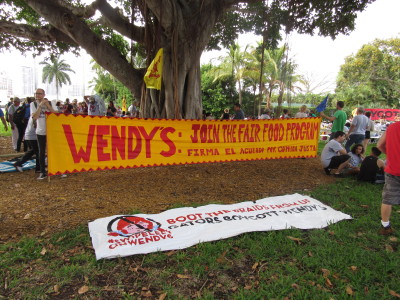 Supporting events such as the CIW’s Workers Voice Tour always serves as a recommitment to the movement for both our YAYAs and other farm worker allies. It gives individuals an opportunity to organize and meet with the workers who are benefiting from the program. It serves an opportunity to engage with farm workers in ways that are not always accessible throughout the year. At YAYA-NFWM, we know these interactions, no matter how short-lived, always gets at the transformative experiences we want our base to have with farm workers. Hearing from workers directly, as well as organizing alongside them, equips allies with personal stories to share with friends and families in their urban communities. We all have a commitment to the farm worker movement since we all rely on their labor to bring food to our tables. So once again I ask, “Did you eat today? If so, remember to THANK a farm worker and get involved!”