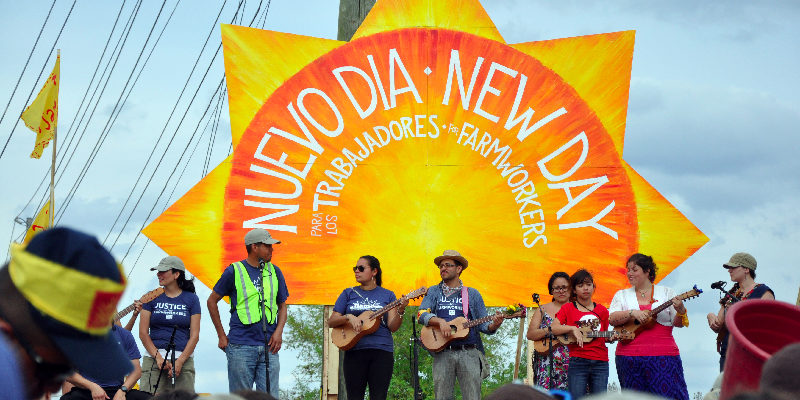 A Message from CIW:

No one saw that coming.

Since the days of the Taco Bell boycott in the early 2000′s, members of the CIW and their allies have joined forces to attend and address shareholder meetings from Louisville, Kentucky, to Amsterdam, the Netherlands.  They have done so using shareholder proxies, the established practice by which a shareholder not attending the meeting authorizes the CIW to attend and speak in his or her place.  And in the decade since the CIW attended its first shareholder meeting, not once has the CIW delegation been turned back at the door.  Ignored after speaking their piece inside the meeting?  Of course.  Brushed off by company executives with platitudes?  More than once.  But never once flatly refused entry and denied the right to present the case for Fair Food to company executives and investors.

In a truly remarkable departure from corporate protocol — one that, while superficially projecting power, in fact bespeaks surprisingly faint-hearted leadership at the highest levels of the country’s largest supermarket — Kroger refused to allow a delegation of CIW and religious leaders to enter, much less to address, its annual shareholder meeting in Cincinnati last month.

In the picture below (from left to right), Claire Comiskey of Interfaith Action, Nely Rodriguez of the CIW, and Mother Paula Jackson of Church of Our Savior of 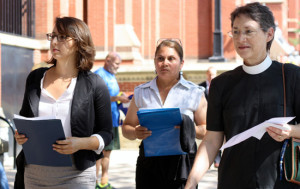 Cincinnati return to join protesters outside the Kroger shareholder meeting after being turned back at the door by Kroger representatives.  The CIW delegation was attempting to attend the Kroger annual meeting with legitimate proxies in hand, as it had — without incident – for the past four Kroger shareholder gatherings.  But this time, the company flatly rejected the delegation’s proxies and so “protected” its shareholders from the Fair Food message of progress and human rights for farmworkers in Kroger’s supply chain.

Needless to say, that didn’t sit well with the nearly 100 protesters gathered outside the meeting that day  Indeed, the day had started as had countless shareholder actions, with a strong showing of local supporters on hand in the streets echoing the delegation’s call for food justice to the crowd inside the meeting.

But this time, things would be different.  When the delegation returned and recounted its unprecedented treatment at the hands of company representatives, the crowd was indignant.  Unwilling to accept the rebuff without a fight, the protesters decided to make their message heard by launching an impromptu march through Cincinnati’s streets to Kroger’s corporate headquarters.

So in the end, Kroger’s attempt to shield its shareholders from the truth backfired, plain and simple.  Instead of protecting investors from the call for Fair Food, Kroger’s decision to block the CIW delegation at the door only resulted in amplifying the workers’ voices.  Through the march witnessed by thousands of city residents, and through the press coverage, the Fair Food message gained an urgency and amplitude that it could never have achieved behind the closed doors of  Kroger’s annual meeting.

What’s more, Kroger’s remarkable decision to try to silence the men and women whose undervalued wages have helped pad the company’s profits for decades only stiffened the resolve of those workers’ Ohio-based allies, allies like Mother Paula who announced to the crowd that she would be encouraging her order to purchase shares themselves in the coming year so that they would not have to rely on proxies to enter the meeting next summer.