The CIW Closes their Tour with Finale in Tampa 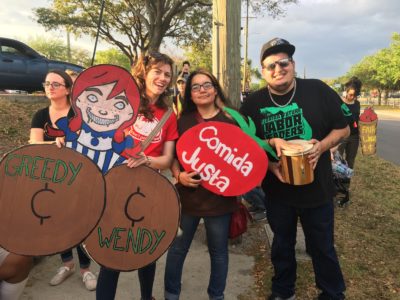 The CIW held a lively, exuberant close to their human rights tour in Tampa last Wednesday, March 29th.  I traveled to the Tampa with Daniela and Curtis from Young Workers, and we had a blast representing Orlando at the march. We started at a Publix, where as usual, a corporate Publix guy took video of us protesters.  We hope they don’t think they can intimidate us by taking our photos and video.  The movement for farm worker justice won’t be stopped by corporate scare tactics. 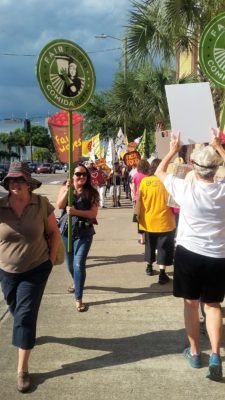 Then we marched to Wendy’s, singing and chanting along the way.  The CIW sent a delegation inside to meet with the store manager while we picketed outside, chanting “Boycott Wendy’s!”  Next, CIW members led us in a closing rally where several local faith and community leaders spoke alongside farm worker leaders.  We look forward to continuing the energy that this awesome tour gave us as we push both the Wendy’s and CIW campaigns forward.  It’s only a matter of time before they join other fast food chains and supermarkets in honoring the Fair Food Program to protect tomato workers’ rights.  The Fair Food Program is a three-way agreement between tomato growers, tomato buyers, and farm workers. The program enables tomato buyers, such as Burger King and Whole Foods, to pay tomato pickers a penny more per pound of tomatoes, which substantially raises farm worker wages. The program also implements a code of ethics that aims to prevent modern-day slavery, wage theft, and other human rights abuses in the fields. 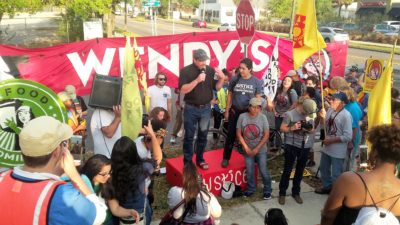