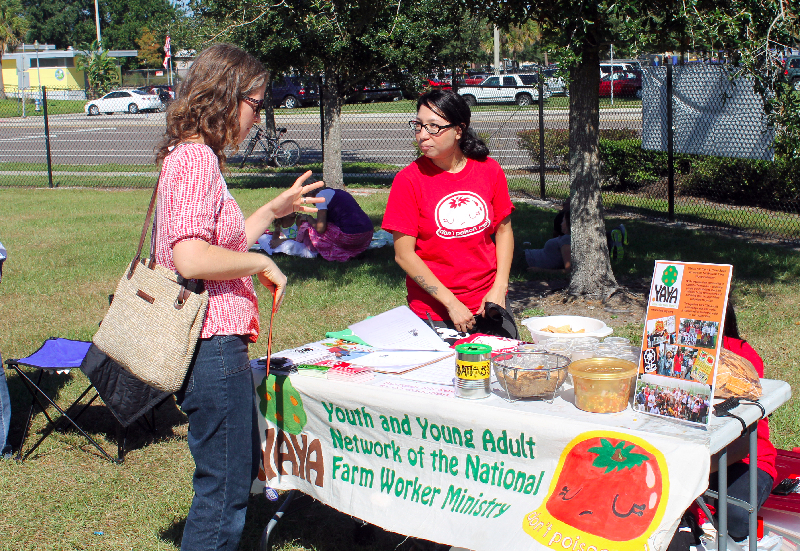 The Central Florida Veg Fest, which took place on October 26th, is a Vegetarians of Central Florida festival that promotes vegetarian and vegan cuisine, and the health and wellness benefits they bring. The festival also focuses on themes of environmental activism and community building.

A lot of times the human labor aspect is forgotten when discussing food issues such as vegetarian living or organic farming. YAYA-NFWM attended this event to remind everyone about the farm workers who pick our fruits and vegetables.

In many ways the goals of this festival are connected to farm worker struggles and it was our job to help people make these connections.

Most fruits and vegetables are still handpicked, regardless of whether they are organic or not. Without farm workers, who would pick the veggies for these vegetarians and vegans?

We also brought up the issue of the environmental and health effects caused by the pesticides used in the fields. Farm workers need more protections against these chemicals because they are directly exposed every day at work!

Finally, we talked to people about the labor rights of those who pick our food and how farm workers across the country are fighting to improve their working conditions. We discussed some of the campaigns that YAYA-NFWM is involved with, such as the Coalition of Immokalee Workers’ Fair Food Campaign and the Farm Labor Organizing Committee’s RJ Reynolds tobacco campaign.

We set up an information table with a banner, bumper stickers, t-shirts, and printed materials to spread awareness about the unjust living and working conditions that farm workers have to endure. We also used food to attract people to our table and subsequently asked them to think about where the food they were eating came from. This was a good way to segue into explaining YAYA-NFWM and its mission.

The festival was very well attended and we were able to talk to many people about our work. We were successful in receiving some donations for t-shirts and stickers, but where we really thrived was getting people to sign up for our newsletter and phone calls!

This was a good event to discuss farm worker struggles as the vegetables being promoted are directly connected to the workers who pick them. I believe we were able to reach out and get the word out to many people who now know more about the oppressive conditions that farm workers live in.