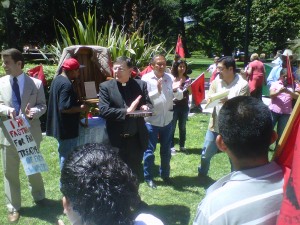 National Farm Worker Ministry staff member Lucy Boutte was present with the United Farm Workers for the last 12 days in Sacramento, helping to organize prayer vigils, marches and fasts in hopes of persuading California Governor Jerry Brown to sign SB 104, the Fair Treatment for Farm Workers Act. NFWM supporters were present at events, made calls to the governor and signed petitions. To our deep disappointment, Governor Brown issued a veto message late on the night of June 28th, the last day he had to sign the bill passed by California legislators.

In a letter from the NFWM Board of Directors to Governor Brown supporting the bill, we acknowledged his work in the 1970’s on the California Agricultural Relations Act but noted that clearly it was not working in the manner intended by either he or the farm workers. He had the opportunity to fix it. SB 104 would have amended the ALRA to help meet the challenges of organizing in the 21st century and provided farm workers in the fields today a more safe and secure option to vote for union representation – representation enabling them to negotiate and ensure safer and fairer working conditions. Governor Brown’s veto denies them that opportunity and delays justice in California’s fields. 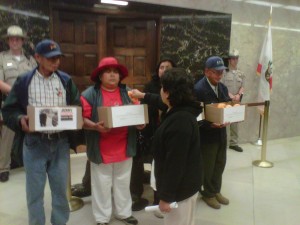 Arturo Rodriguez, UFW President, issued the following statement following the veto: “What never changes in politics is power. Governor Brown accepted the arguments made by the powerful agribusiness lobby and rejected the cause of powerless farm workers.”

The following day, the farm workers illustrated the hypocrisy shown by the Governor. Recalling what he said during his gubernatorial campaign – that it was wrong to treat immigrant workers like an orange, thrown away after its been squeezed – they filed single file into the capitol hall in front of his office and squeezed oranges into boxes. The farm workers won’t let the Governor forget his stated commitment to their cause, nor his frequent references to Cesar Chavez during his campaign. They vowed that the bill would be returned to his desk in the future.