Led by the image of Our Lady of Guadalupe, over 1000 farm workers, faith leaders, activists and students marched to Congressman Kevin McCarthy’s office on Thursday demanding a vote on immigration reform.  With fresh fruits and vegetables in hand, farm workers asked to speak with Congressman McCarthy, but were met by a locked door.

“These fruits and vegetables represent an honest days work and serve as a bold reminder of the need for a stable and committed agricultural workforce. Comprehensive immigration reform is a huge step towards sustaining the industry and doing right by those who feed the nation,” said Rev. Lindsay C. Comstock, Executive Director of the National Farm Worker Ministry.

Rep. McCarthy’s office has been the site of numerous actions since the passage of the Senate immigration bill over 300 days ago. As House 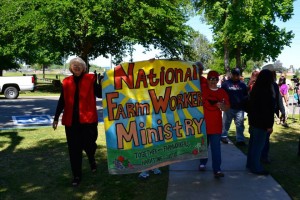 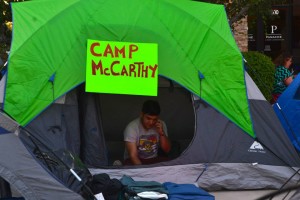