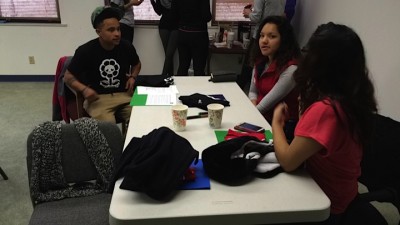 During the first week of March, a group of students from the University of South Florida (USF) made their way to Raleigh, North Carolina for their Alternative Spring Break also known as Bulls Service Break. These students met up with the YAYA-NFWM organization where they were educated on the migrant issues involving farmworker justice. The two speakers representing YAYA-NFWM were Nico Gumbs and Heather Bryan. Both of these speakers, from Orlando, Florida, met many times with the group of students and introduced them to many other organizations that worked with YAYA-NFWM and in the farm worker movement. SAF (Student Action with Farmworkers), and FLOC (Farm Labor Organization Committee) were just some of the other organizations that work hand in hand with YAYA-NFWM on farmworker justice. The issues of housing, pay and treatment, along with other issues were addressed.

While the students met with the YAYA-NFWM organization, both speakers educated the students with the history of farm worker justice. Many films were watched, one of them highlighting the late Cesar Chavez, who initiated the whole movement. Other activities included meeting with speakers from different organizations so as to get a more comprehensive outlook on how individuals can address farm worker issues. One in specific was Mary Rockers, of Farmworker Health, who worked with health issues relating to working on the fields. Something very unique that she brought up was the use of mobile health clinics that went out to the migrant camps and assisted the workers right there and then. Many of the students that came from Florida to learn and work for this issue, already had some background on the issue. Many were either part of a migrant family themselves while others have never heard or even seen an agricultural farm. 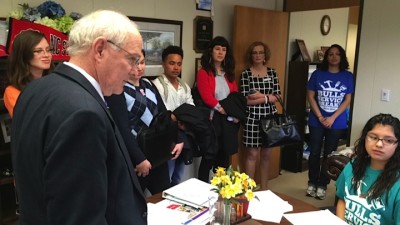 I myself remember a particular event that I enjoyed the most, lobbying. While meeting with SAF staff, our group from USF was able to lobby for in-state tuition for undocumented students. I was able to speak to representatives and senators in order to gain their support on the bill. While we had great support from some, convincing others to take our side, was a challenge. These types of activities were new to me but it opened my eyes to how serious these issues need to be taken.

Coming from a migrant family myself, I was aware of the many injustices that we as migrant farm-working families face. After the week’s experience I felt empowered and not alone. Meeting so many people, made me feel like a family that unites together to fight for the same cause. I never realized how big of an issue farm worker rights is until I was well educated on the topic. After visiting several migrant camps and talking to migrant farmworkers, I was able to experience and hear from them what they thought were the injustices made against them. Coming back to Tampa, I feel empowered to keep fighting for migrant rights. By educating others on the importance of this social issue, I wish to better the lives of all farm workers.