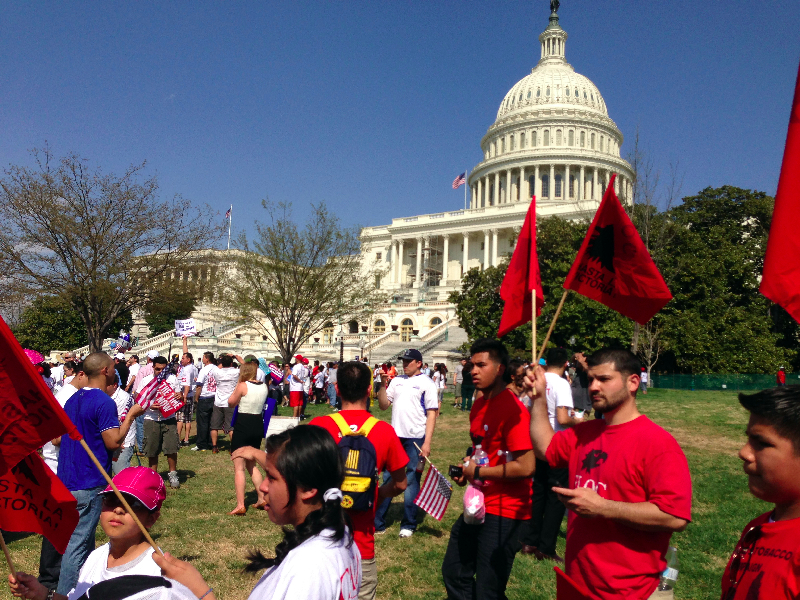 At approximately 4:00 am on April 7th, 2013, four members of YAYA left Orlando, Florida, by rental car, to arrive around 6:00 pm that evening at the Ravensworth Baptist Church, in Virginia. There, YAYA members would give a presentation about farm working conditions, before going to Washington D.C. to advocate Congress for immigration reform and farm worker rights.

The church received the YAYA members with open arms. Dinner was provided before the presentation. After dinner, YAYAs took turns giving an informative and lively presentation. The audience seemed to be very interested and was disturbed to find out about the injustices that farm workers and their families have to endure. There were several great questions from the audience at the end of the presentation. One important question asked was, “What can the church do to help?” YAYA of course had no shortage of answers. During dessert, more questions were asked about the farm workers and YAYA itself. Soon after 8:30 pm, YAYAs thanked the congregation for their hospitality and departed for Washington D.C.

In D.C., YAYAs stayed at Calvary Baptist Church right next to one of the Smithsonian Museums, thanks to arrangements made by NFWM Board member Sylvia Campbell.  We were comfortable in our sleeping bags and showers were provided, along with bagels and juice for the morning.

The next day, YAYAs woke up early and headed to a rousing meeting at the Washington City Church of the Brethren where NFWM Board member Nathan Hosler is an active member. 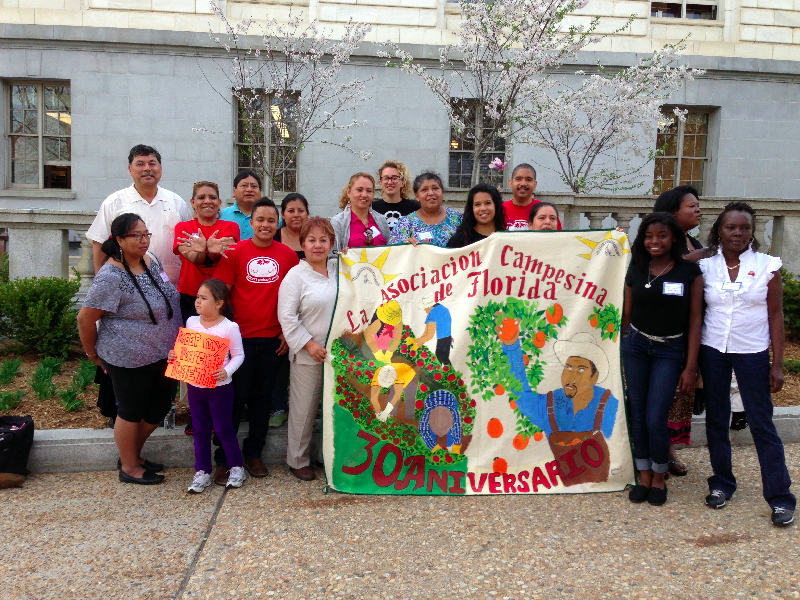 YAYA members, along with delegations from the Farm Worker Association of Florida (FWAF), the United Farm Workers (UFW), and the United Farm Worker Foundation joined in prayer and solidarity prior to planning the day’s event at the Capitol. The group of over one hundred also included members of FLOC (the Farm Labor Organizing Committee),  PCUN, (Pineros y Campesino’s del Noroeste) and CATA (El Comite de Apoyo a Los Trabajadores Agricolas).

Eleven groups were formed and each group was assigned a legislative office to visit. The groups walked from the church to the Capitol and by 11:00 am, with bag lunches in hand, began making their rounds to the offices of senators and representatives.

The first office that YAYA and FWAF members entered was that of Democratic Congressman Tim Walz from Minnesota. The group met with at least one legislative assistant per office. Some assistants could speak Spanish as well as English. The presentations went well and each time the presenters did better. They took turns asking questions such as: Do you support Comprehensive Immigration Reform? Do you support a path to citizenship? Will you decline any measure that will allow wages to fall for current farm workers? Presenters also shared their personal experiences of being an immigrant and/or a farm worker in the United States.

The group met with four or five legislative staff members from the House and Senate during the first day. The last meeting was with Senator Marco Rubio’s office. The group spoke directly with Rubio’s Special Counsel Enrique Gonzalez. Mr. Gonzalez spoke at length about the Senate’s proposed bill which came out Tuesday, April 16, 2013.

The groups ended the day by heading back to the Church of the Brethren for dinner and a debriefing by all the groups. Toward the end of the debriefing, we sang Happy Birthday to Cesar Chavez’s granddaughter, Julie Rodriguez, who is the Associate Director of the White House Office of Public Engagement and who had stopped by to show support.  Finally, everyone headed back to their churches for a much needed rest.

The next morning, YAYA and FWAF delegates joined the others in the farm worker group at the United States Department of Agriculture (USDA) to listen to speeches from USDA Secretary Tom Vilsack and the Alianza Nacional de Campesinas (Alliance of National Women Farm Workers). What was most memorable about this occasion was that although Cesar Chavez was never invited to the USDA building, his granddaughter Christina Chavez, now works for the USDA as the Agency’s first Farmworker Coordinator. Copies of President Barack Obama’s dedication of the Cesar E. Chavez national monument were passed out towards the end of the event.

After the USDA event, we went to the Capitol for day two of legislative visits. On this day we had an interesting meeting with the legislative assistants of Montana Senator Max Baucus. It is important to note that Montana has few people of color and many of its inhabitants live far apart from one another; there seemed to be is little understanding of the issues by the staff with whom we met.  We were informed that the Senator had not yet taken an official position on immigration reform.

Senator Al Franken’s office was a good experience to have at the end of the day. The assistant was knowledgeable, bilingual, and attentive. He appeared interested in what we had to say. Senator Franken was definitely for Comprehensive Immigration Reform and a pathway to citizenship.

The evening ended with a buffet dinner where there appeared to be unending servings of tacos and enchiladas. Before the dinner, there were recognitions and special appearances by UFW President, Arturo Rodriguez, FLOC president, Baldemar Velasquez, UFW Foundation Director, Diana Tellefson,  FWAF President Tirso Moreno, and others.   The evening was filled with laughter and hope.

On the last day, YAYA and FWAF members met at the Washington Court hotel for a light breakfast and then presentations from a delegation of politicians and activists from California. The event ended with a speech by California Senator Barbara Boxer. Our group left for the Senate and House buildings to finish the visits. 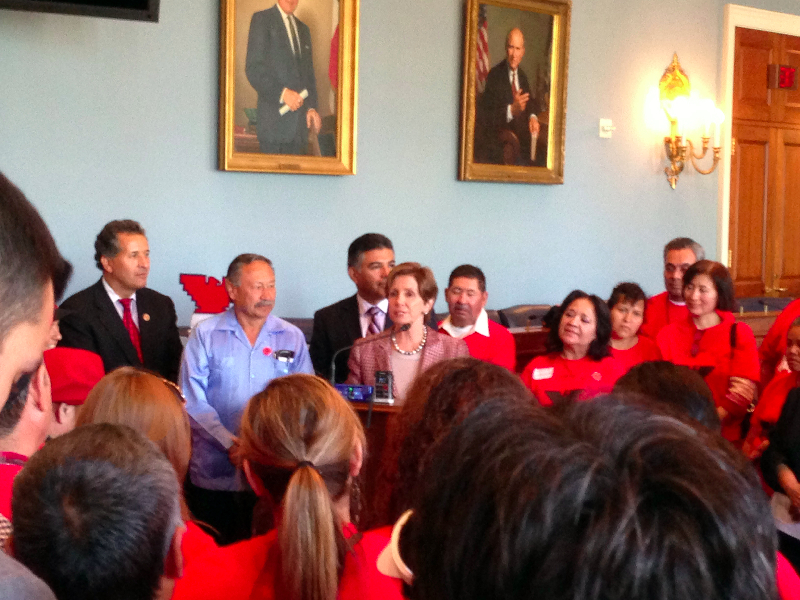 Half of the group had a couple of special treats. They got to see and hear Arturo Rodriguez speak again at an event in the Capitol hosted by Representatives Tony Cardenas and Mike Honda of California  and attended by over 20 members of the House of Representatives,  incuding the former Speaker of the House and current House Minority Leader Nancy Pelosi. She also gave a rousing speech. It was standing room only. However, the staff was extremely accommodating and invited all the activists into the room to see and hear the speeches.

Our second treat was just as exciting. We were invited by staff to personally meet and hear Virginia Senators Mark Warner and Tim Kane. It was standing room only, once again, as the senators showed great optimism and enthusiasm for immigration reform. Both senators spoke at length (and in Spanish) to the crowd.

At 3:00 pm, we met on the Capitol grounds to walk and rally to Capitol Hill with   tens of thousands of activists from around the nation. Music, speeches, and chants of Si Se Puede! filled the air.

The day ended back at the Church of the Brethren with a delicious steak strip, rice, and salad dinner during the final debriefings. The groups briefly conveyed their individual experiences during the three days. YAYA bid farewell to our friends from FWAF and the other farm workers from across the country, and headed back to Orlando.

The Washington D.C. trip was exciting and full of learning experiences. New friendships were made and old friendships solidified. Farm workers and leaders and staff of NFWM-YAYA made us believe that “Si Se Puede!”

Photos courtesy of by Emily Helm, the United Farm Workers and the UFW Foundation