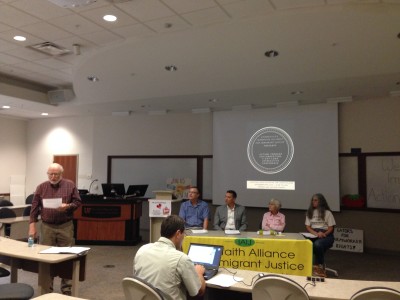 On Saturday, September 19th 2015, 2 YAYAs and a Farmworker Association of Florida AmeriCorps volunteer traveled to Gainesville to attend the Interfaith Alliance for Immigrant Justice (IAIJ) “Action though Collaboration” conference, which was moderated by the National Farm Worker Ministry Board Member, Sam Trickey. About 50 people (very intergenerational crowd) were present for the 1-day event highlighting the work of North and Central Florida nonprofit organizations working to advance immigrant and farm worker rights in the country. The day’s agenda was split around 3 panels: policy, advocacy, and service.

The first panel spoke to policy initiatives in the country around immigration reform. The panel members mainly briefed participants on the immigration reform bills that were brought before congress during President Obama’s two terms. Basically, this panel laid down the groundwork for what the current immigration rhetoric is as we move into 2016 and President Obama’s executive action still being held up due to the injunction filed by several states against the executive order. We also heard from Jeannie Economos, of the Farmworker Association of Florida, who spoke to the more global impact of immigration in the U.S. She made sure to highlight the issues of free-trade agreements in Central and South America that have displaced millions of people in their home countries leading them to take the long, arduous journey to El Norte. During this panel, Congressman Ted Yoho made an appearance and urged participants to ask their representatives to make moves on talking about the current immigration situation in the U.S.

The second panel spoke to organizations working either directly with the folks impacted in immigration and/or farm worker or organizations working alongside these folks. It was a great discussion around how these different organizations take different approaches to addressing the issues faced by immigrants in the U.S. and how farm workers are fighting for their dignity by creating worker programs in the fields as well as, organizations working alongside those most affected to find solutions to the issues they are facing. I was on this panel, along with the Coalition of Immokalee Workers, to talk about YAYA-NFWM’s work within different farm worker communities. I think it is pertinent to highlight from my talk that solidarity can no longer be talked about as some stagnant word in which we all have an understanding of such. Solidarity, as most English words, is organic, growing and adapts to the community one claims to be working in solidarity with. At YAYA-NFWM we have seen this as each farm worker community and/or campaign has a different ask of how we can support them.

Lastly, we listened to groups who are giving direct services to farm workers or immigrants in their communities. The panel consisted of organizations such as the Redland Christian Migrant Program (RCMA) who spoke to the work they do with migrant children in the state. No other state has a program like RCMA that specifically addresses the needs of migrant children. They have several offices throughout the state, primarily in farm worker communities. These panelists really touched on the everyday needs of immigrant and farm worker communities. Often times we conflate service organizations for being apart of the “problem” – that is perpetuating poverty in these communities through their services being offered. However, systematic poverty cannot be eradicated in a day, a year, or a decade for that matter so I believe it is important to uplift the work of service organizations who, more often than not, are working on the ground more so than advocacy and/or policy-oriented organizations. They have a thorough understanding of the needs of the community on a more daily basis than others can claim. Again, it is important to uplift these organizations in the fight for social justice. Service organizations play a crucial role in sustaining these communities as we ALL continue to fight for the empowerment and dignity farm workers and immigrants deserve.

Overall, the event was great and I am glad I had the opportunity to speak on the panel to represent the important work YAYA-NFWM does in solidarity with farm workers!