My 3 a.m. Call with Dan Gerawan

Intimidation and manipulation are an every day reality for many farm workers, most of whom are 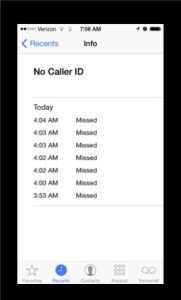 far from home and unfamiliar with the very basic laws that protect them.  Employers who knowingly intimidate their workers in order to enforce silence in the face of injustice or compliance in the face of unfair or unjust demands commit a crime much more reprehensible than violence.  They assault their own moral character and break the trust of hard working individuals and families who are looking for an honest day’s pay for an honest day’s work.

In the early morning hours of May 22, my spouse and I were jarred awake by the unexpected ring of my cellphone on the nightstand.  As I looked over to see if my morning alarm had somehow been set to the wrong time, I noticed that it was only 3:53 a.m.  Convinced it was a wrong number or a salesperson from overseas, I silenced the ringing phone and attempted to go back to sleep.   Seven minutes later, the phone rang again.  The caller ID read “blocked” and I noticed that no message had been left on my voicemail.  Disoriented by the early nature of this call, I held the phone while it rang.  Oddly, the person hung up before the voicemail picked up.  Five more times the phone rang and the caller hung up before the voicemail picked up. Finally, I was worried enough that something was wrong somewhere so I made my way into the office of my house and quietly answered the phone.

Following the introduction, Mr. Gerawan launched into a wild rant over all of the things he felt were wrong about the state Agricultural Labor Relation Board’s recent decision to apply California law so as to allow a union contract for his workers who voted to be represented by the United Farm Workers back in 1990.  Mr. Gerawan protested his frustration over the ruling and his determination not to implement the state-issued contract.  Mr. Gerawan also angrily expressed his outrage that National Farm Worker Ministry would support this law and organize people of faith to that end.  Dan Gerawan’s tone was not meant to engage in a civil discussion, but to intimidate me into backing away from supporting farm workers.  He was not interested in dialogue; but rather sought to use his power and outrage to silence me and my organization.

In a recent letter, James Winkler, General Secretary and President of the National Council of Churches, wrote Mr. Gerawan:

“California is the only state that affords farm workers the legal protections to organize through the Agricultural Labor Relations Act (ALRA). That law was not won easily, and for many years, lacked the resources to properly enforce it. Later amendments to the ALRA, such as the Mandatory Mediation act, were passed by the California legislature in recognition of the need for greater enforcement mechanisms. Thus I was particularly dismayed to learn from colleagues, and from ALRA documents, that when the UFW sought to exercise their bargaining rights under that law at Gerawan you chose not only to ignore the law, but to engage in multiple violations of it, including exercising illegal influence over employees, failing to bargain in good faith, and then failing to implement the resulting court mandated contract.”

Dan Gerawan and I have never met face to face.  However, if someone who I have never met finds it appropriate to call my home numerous times at such an inappropriate hour and attempt to intimidate me and my organization into dropping support of the farm workers who eagerly wait for California law to be followed and their contract to be implemented, then you would be hard pressed to convince me that Dan Gerawan and Gerawan Farming are somehow being wronged by all of this.

Conservative calculations by the UFW show that by refusing to implement this contract, Dan Gerawan is depriving his workers of many millions of dollars owed to them in wages and benefits retroactive to July 2013, as well as millions more over the contract’s duration.  This is a blatant injustice, an ethical atrocity around which the National Farm Worker Ministry will continue to organize faith communities until we see justice done for the hard-working men and women who feed this nation.

The next time you buy Gerawan’s Prima-label produce at Walmart or other participating retailers, remember that at the far end of this supply chain are thousands of farm workers waiting for justice to be served.  Take action today by speaking with your local Walmart manager about the plight of Prima farm workers at Gerawan Farms.