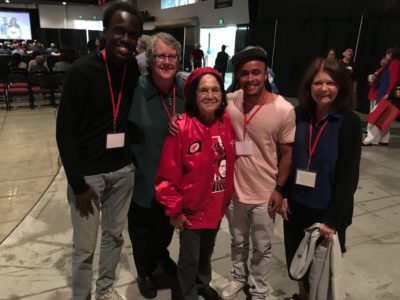 Earlier in May, I joined the National Farm Worker Ministry staff and board as we journeyed to Bakersfield, California for the 50th anniversary of the United Farm Workers Convention. The convention serves as the place where all the delegates of the UFW, representing various areas around the west coast, elect and re-elect the leaders of the organization, and create a strategic plan until the next convention. Bakersfield is a small town in the central valley but it has tremendous significance to the farm worker movement through as it holds the headquarters to the UFW. It’s in close proximity to La Paz, the final resting place of Helen and Cesar Chavez, co-founders of the organization, and home to many of the farms that many of the farmworkers represented at the convention work in.

I served a volunteer role with communications at the convention with Nico, the YAYA National Coordinator, while Julie, NFWM Executive Director, and Dr. Sylvia Campbell, the NFWM Board President were distinguished guests to the convention. I was worried that I was going to miss the happenings or only see it from afar, as communications people are usually in the corner, making sure the people who could not make it to Bakersfield have access to what’s going on digitally. My role, however, was very interactive. I was constantly moving in and out of the delegate spaces taking pictures and quoting event happenings on Twitter (#UFW2016).

It was tiring, but in the end it was very intense. I was able to rub shoulders with co-founder and a goddess of the farmworker movement, Dolores Huerta, who was maneuvering through the convention floor so smoothly. She was honestly the most down to earth VIP I’ve ever seen! I was also able to see many of the up-and-coming Californians in the political world that I have only seen and heard about on social media. It was amazing to see how much power that the UFW has and how their process works. The first day it was nerve racking because I was totally new to this setting, and I haven’t been to a convention since 2013, but after I gained a groove and was able to provide support effectively.

One of the best feel good moments for me was post-convention. I left my computer charger at the convention center, and I stumbled in on a late night dance party, courtesy of Little Joe. It was an awesome moment.