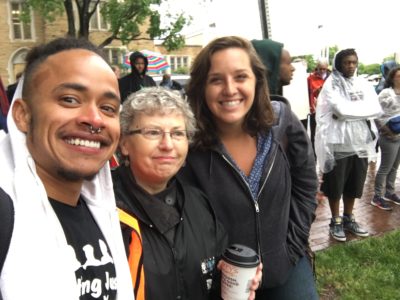 The 2016 FLOC trip was smaller and shorter than years past, however, there was some serious quality packed into this three day whirlwind. Nico Gumbs, Coordinator of YAYA, and I headed off Tuesday, May 3rd from Orlando to North Carolina.

On May 4th we had a chance to meet with the Fund 4 Democratic Communities and learn from them about grassroots fundraising.   Their office is situated in a repurposed historic warehouse with endless- seeming hallways and high ceilings, which at first seemed cold, but was full of the warmth, radiating from the wonderful people and impactful work done from their offices. We meet with Shawnee, an organizer for the F4DC, and Alex, a Staff member from NFWM, to discuss the role of grassroots fundraising in different kinds of organizations. To frame the conversation about fundraising, we began by assessing our own personal relationship to money, which enriched the conversation greatly and helped contextualize “fundraising” and its challenges for organizers and volunteers. I am so thankful to Shawnee and Alex for taking what I expected to be a formal top-down training and making it into an engaging and personal experience with many take- aways for YAYA’s future events, and take-aways for social justice work as a whole.
Later that day, the Greensboro Mural Project, a local organization that builds community through art, provided a training for us. In our wonderful host’s beautiful yard, we met with 6 members of the Project to learn some stenciling techniques. Equipped with recycled cardboard, x-acto knives, spray paint, and wheat paste, our teachers gave us free reign to create our own stencils. It was wonderful to engage with local activists and talk about what YAYA does, and about the work the Mural Project does. Under an intensely blue North Carolina sky we had the empowering experience of putting our stencils onto the generously provided garage walls with wheat paste. A non-permanent, non-toxic, and non-damaging, way to bond art to a wall, wheatpaste is an inexpensive and fun art project that also can pack a serious political punch. 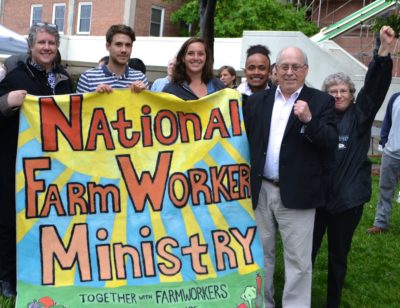 Creeping out of bed at 6:30 the next morning, I had the opportunity to accompany Julie and Susan, NFWM staff to the Reynolds American Tobacco Company annual shareholders meeting. They are the second-largest tobacco company in the United States and their shareholders meeting is an opportunity for those who own stock in their company to hold them accountable. YAYA has been attending this meeting for 8 years to support FLOC, the Farm Labor Organizing Committee, in their efforts to call attention to the human rights abuses in the tobacco supply chain. The meeting was pageant- like in its coordination and stiffness, as Reynolds would have preferred the meeting to remain. The meeting opened with a report of finances, and many congratulations to one another for their corporate successes. Their CEO was ready for FLOC and their supporters, spending a chunk of her presentation discussing how they are monitoring the “alleged” human rights abuses in their supply chain and the vague work they are doing to combat these abuses. When the question and answer period opened up, the rush to the mics revealed that most questioners were there to bring awareness to the abuse of farmworkers in tobacco fields, and Reynolds American’s complicity in that abuse. Their board members wooden faces were unmoved even when a young man, only 14 years old, described the hardships he endured working in the tobacco fields and the consequences for his whole family. As tears streamed down his face, and asked earnestly why Reynolds couldn’t pay his mother enough to live on, the faces of the corporation representatives ranged from utter boredom to polite indifference. Their faces said all we need to know about how much they care about farmworkers at Reynolds American.There wasn’t sufficient time for me to ask the question I had been assigned to ask as a proxy for a shareholder, but the most important voices spoke out, and asked questions. The farmworker youth who are most affected by Reynolds’ practices got the chance to speak out, even if their voices fell on mainly deaf ears with Reynolds. 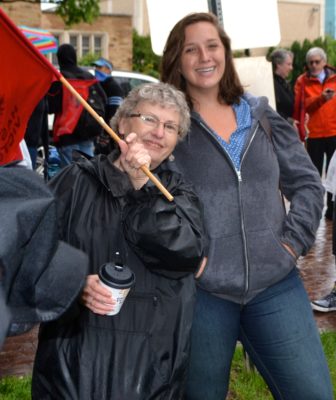 After the shareholders meeting, we went outside into the very chilly and wet weather and were met by hundreds of FLOC members and allies. The picket line chanted and marched along with the awesome local activist drumline, Cakalak Thunder. Despite the cold and rain we filled the streets of Winston Salem and marched with vigor. The march ended at a rally point where the president of FLOC and many FLOC members spoke. In contrast to the stiff speeches given by Reynolds, the speakers were passionate, candid, and determined. Their power and energy will not be denied, and am so glad YAYA stands with FLOC and that I had an opportunity to participate in their action.