Migrant Justice’s Milk with Dignity Program is bringing about a new day in the dairy industry. The program brings together farm workers, farmers, buyers, and consumers to secure dignified working conditions in dairy supply chains. The Program enlists the resources of food industry leaders, such as Ben & Jerry’s, that have made legally-binding commitments to protect workers’ human rights. Those participating buyers provide a premium to participating farms that agree to work towards compliance with the labor standards in the Milk with Dignity (MD) Code of Conduct. The premium supports farms’ compliance with the Code and rewards farms that comply. 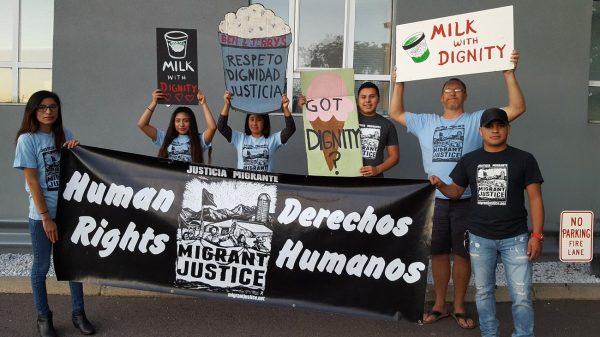 In contrast to the labeling-centered approaches of existing fair trade certification schemes, Milk with Dignity pursues a vision of fairness put forward by the farm workers themselves. For this reason, Milk with Dignity does not use labels.

Participating Farms in the Milk with Dignity Program are paid a premium to support and reward compliance with the Code of Conduct.

History of Milk With Dignity

After years of “putting out fires” in defense of Vermont dairy worker’s rights on a farm by farm basis, Vermont farm worker members of Migrant Justice decided it was time for a systemic solution with the capacity to drive industry wide change. In 2014, Vermont dairy workers conducted an in-depth survey to document the top workplace and housing issues in the industry. Workers then converted these worker’s rights and housing violations into solutions in the creation of the Milk with Dignity Code of Conduct — defining the human rights essential to a dignified workplace and fair housing.

Read about farm worker conditions in dairy farms in Vermont outside of the Milk With Dignity Program.