Do you realize what NC farm workers have accomplished?

Some history behind the upcoming RJ Reynolds shareholders meeting, and why you’re needed!

I’ve recently watched documentaries on the 60s and 70 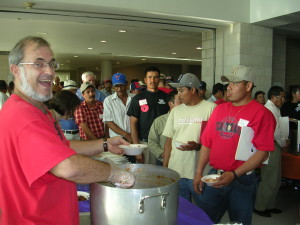 s history of the civil rights movement, like the Freedom Riders campaign… in awe of the courageous organizers, leaders and everyday resisters. But I also felt a sort of quizzical embarrassment – what was I doing (or not doing) back then? How could I not have realized how important those events were, and what sacrifices were being made? How could I not have been aware that the call to action included a call to me? Maybe during my early years, youth and high school were somewhat legitimate excuses for obliviousness, but it was well into college before I even began to recognize there were significant social justice changes going on, and even then could not recognize my own relevance.

We are buried in our everyday lives, and sometimes cannot recognize those events and movements that we later understand were momentous, and were crying out for our contribution. I want to call your attention to one such campaign. Over the past 40 years, farmworkers in the Midwest and South have built a powerful organization – in the face of the most vicious kinds of discrimination and exploitation, in the face of state government indifference and political disdain, in the face of private and public antipathy towards worker organizing. That organization, FLOC (the Farm Labor Organizing Committee) has, for the past 8 years, pressured one of the most powerful corporations in America – RJ Reynolds — to make fundamental changes in the tobacco supply chain that would raise up 30,000 workers’ living and working conditions, and create a precedent that gives promise to all farmworkers in the South achieving the dignity that they deserve.

Those farmworkers have called out for our help, for this is not their battle alone. They need for us to be visible; they need for us to stand up and be counted. It’s so simple, and yet so hard – to take off an entire morning. And yet, on that future day when RJR finally says “we’ve figured out a way not to lose face, but to guarantee freedom of association to all tobacco farmworkers on our contract farms”, we will exult, and be proud to say:  “yep, I was there.   I stood up. I was a small part of one of the most amazing victories in US labor history.”So, commit, this year, to supporting FLOC this year at the annual RJR Shareholders meeting (SHM)  May 7th, at Reynolds American corporate Headquarters in Winston-Salem.  If you’ve attended before, come again. If you’ve never attended, make time and energy to attend this one.

You’ll be glad you did!