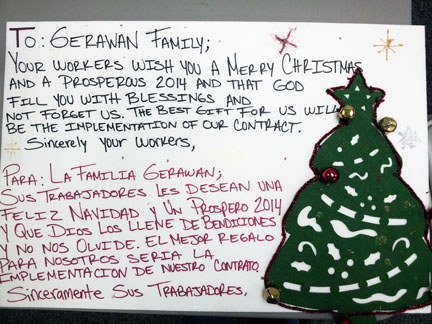 Next week a delegation of dozens of Gerawan workers will deliver a holiday card signed by workers and a petition with thousands of signatures from supporters all over the world telling this giant fruit grower, “Enough delays. Immediately implement the contract the ALRB ordered. Gerawan farm workers have waited long enough.”

Gerawan Farming Inc. is one of the world’s biggest fruit growers with at least 5,000 workers. Workers at Gerawan voted for the United Farm Workers, but they have not yet benefited from a union contract. It’s not from lack of trying. After the UFW and Gerawan were unable to reach agreement on the full contract, Gerawan was ordered in April by the state farm labor board (ALRB) to engage in mandatory mediation. This resulted in a 3-year contract with wage increases of 12.5% over the life of the contract, reduction of hours to qualify for bonuses, 4 paid holidays, and numerous worker protections. Gerawan employees and the negotiating committee were very excited on November 19th when the ALRB approved the mediator’s report. By law, the contract immediately went into effect and Gerawan workers should be spending the holiday season working under a UFW contract. Among other things the contract gives them Christmas Day off as a new paid holiday.

The problem is Gerawan thinks they are above the law. So they are trying to delay the contract again. And the system is letting them slide despite the ALRB Regional Director’s finding that Gerawan helped orchestrate decertification efforts at its farm. The violations against Gerawan were so outrageous that the UFW turned in 1,410 pages of objections to the decertification election that included 96 declarations documenting the company involvement.

Gerawan workers are tired of the delays. Can you show these workers you support them by signing their petition today? Let Gerawan know that the best holiday gift they can give their workers would be the implementation of their contract.”