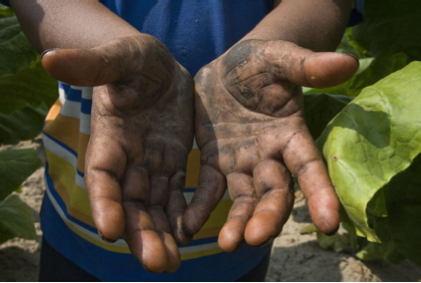 The situation for tobacco farmworkers in North Carolina is dire.

A report from Oxfam America and the Farm Labor Organizing Committee (FLOC) released last year showed that tobacco farmworkers often live in labor camps with inadequate or non-functioning toilets and showers and other substandard conditions, suffer from illnesses resulting from nicotine poisoning and exposure to dangerous pesticides and work long hours for below poverty wages. Wawa profits from the sale of tobacco products of companies that buy tobacco in North Carolina.

Join Wawa consumers who care about the conditions of tobacco farmworkers in the fields of North Carolina.

Wawa sells Reynolds products and their distributor is the largest Reynolds customer in the country. We think Wawa can and should get involved!

Reynolds American claims that the company has taken steps to ensure that exploitative conditions do not exist on their contract farms, but there are important steps that still need to be taken to guarantee that tobacco farmworkers have a safe and healthy work place and receive fair compensation. Reynolds should work with FLOC to develop a written agreement that guarantees freedom of association and collective bargaining to tobacco farmworkers.