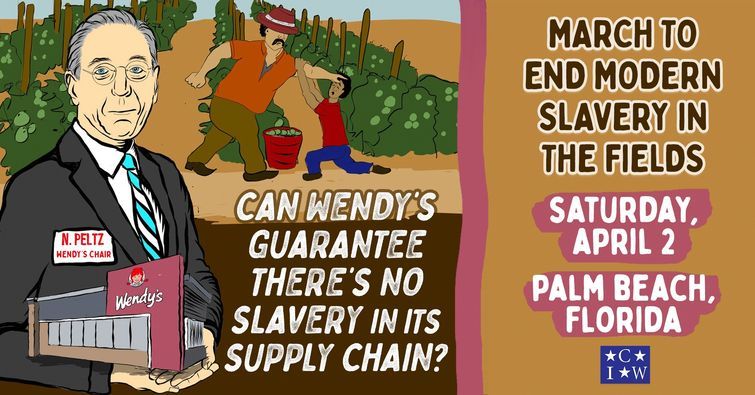 Join Coalition of Immokalee Workers (CIW) on Saturday, April 2, in Palm Beach, Florida, when they march to end forced labor and other human rights abuses in the fields. The goal of the march is to help bring Wendy’s off the sidelines and into CIW’s Fair Food Program. Wendy’s stands alone as the last of the five major fast-food corporations in the country to refuse to join the Fair Food Program. After more than 10 years, Wendy’s is still not listening. Let’s show support for this mobilization so they will.

Why Palm Beach, FL? There is one man more responsible than any other for Wendy’s failure to join the Fair Food Program: Multi-billionaire and hedge fund mogul, Nelson Peltz, who has a home in Palm Beach. Mr. Peltz is not only the Board Chairman of Wendy’s – with his son at his side as Vice Chair – but also CEO of the hedge fund Trian Partners, Wendy’s largest institutional shareholder.

If you are not in Florida or can’t make it to the march, help us work hard to generate as much support for this effort as possible. First, if you have family, friends, part of your network in Florida – ask them to show up and join the people who will march together with farm workers and rally at key places so farm worker voices will be heard in Palm Beach.

You can also have an impact wherever you are! Use April 2nd as an opportunity to deliver a store manager’s letter to your local Wendy’s.  Take your photo and post it on social media stating: “I stand with @nfwministry and pledge to boycott @Wendys until the final fast food holdout joins @FairFoodProgram! bit.ly/boycott-wendys #BoycottWendys”.

Whether you will march in FL or take action locally, let’s demonstrate our solidarity with CIW and show Wendy’s there are supporters all around the country who are part of this effort.