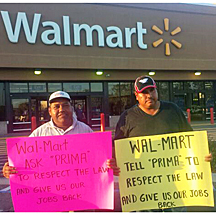 Retailers and growers want us to believe that they’re doing right by the environment and workers. Gerawan Farming, producers of Prima brand plums, peaches, nectarines and grapes talks about the “best wages” and other benefits they allegedly provide to over 5,000 farm workers who harvest these crops. Walmart, a major purchaser of Prima brand products, also makes similar statements, and has gone as far as posting “Standards for Suppliers.“

Earlier this month, we shared news of this lawsuit with Walmart, informing them that by failing to pay farm workers minimum wage, Prima brand products were in violation of Walmart’s supplier standards. We also told them about the litany of other human rights violations and labor law violations farm workers have suffered, along with intimidation and fraud.

Join us in calling on Walmart to live up to their supplier standards.