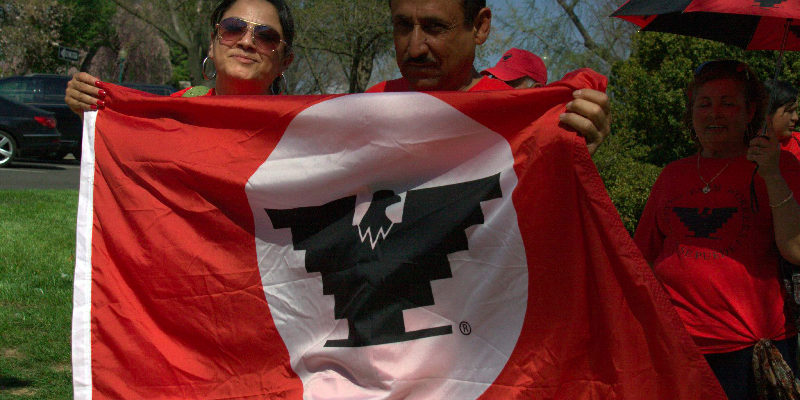 “Breaking the law doesn’t seem to bother Gerawan Farming Inc., one of America’s largest fruit growers, which markets under its Prima label. We’ve come to you many times before over the litany of law violations Gerawan has committed against its workers who are fighting hard for their United Farm Workers contract. Now Gerawan has once again ignored the law, this time over health insurance for workers and their families.

While Gerawan refuses to implement its workers’ state-issued union contract, the law is very clear: Since the UFW is the workers’ certified union,Gerawan cannot decide on its own to change workers’ pay or benefits withoutnegotiating or advising the UFW.

But as usual, Gerawan seems to think the law does not apply to this giant company. Before, Gerawan offered workers poor health plan coverage. The health plan applied mainly if workers worked nearly year-round. Very few workers qualified and fewer still signed up for the plan because they had to pay nearly $500 a month for family coverage—plus pay a $1,500/$3,000 deductible (individual/family). Such costs were way beyond what most workers could afford.

Only 13 of Gerawan’s more than 5,000 workers had health coverage in 2013 under the company medical plan.

On December 29, 2014, Gerawan informed workers about the change in the workers’ health plan from a bad plan to something far, far worse. Gerawan DID NOTadvise or negotiate with the UFW first as the established law requires.

This new plan requires workers to pay more than $825 a month for the family plan PLUS the deductible would grow to $5,000/$10,000 a year (individual/family). If workers couldn’t afford the company’s earlier health coverage for their families, how does Gerawan think they could afford the new, more expensive one?

The UFW offered Gerawan a better option. During negotiations in August 2013, the union proposed a medical plan with a low $5 deductible that would cover up to 80 percent of the workers’ health care costs and would cost the company almost $400 less per worker for family coverage.

Gerawan’s latest move is especially harmful because if workers and their families don’t take the very costly company plan, they will not be able to receive subsidies under the Affordable Care Act. You see, workers who do not accept employer-offered plans cannot get federal health care subsidies. Remember, hardly any of Gerawan’s 5,000 workers signed up for the company’s plan because it is so expensive.

The UFW has filed charges against Gerawan for once more breaking the law and plans to file more. In the meantime, workers don’t have medical care through Gerawan and they are frustrated and upset. A delegation of these Gerawan workers want to deliver a petition to the company this month expressing their outrage about yet another move by Gerawan to make decisions affecting workers’ lives without consulting their union or the workers. Won’t you sign it today and tell Gerawan it cannot continue disobeying the law?“