Donate Now
NFWM > About > Our History > Forty Years of NFWM: The Cost & Joy of Discipleship: An Oral History Project

Background
In January of 1971, leaders of various state Migrant Ministries that had been providing charity and service to migrant workers since the 1920s met in Atlanta to discuss the future of their ministries’ relationship to the growing farm worker organizing movement.  At that meeting, they founded the National Farm Worker Ministry (NFWM) with the commitment to organize faith communities to support the campaigns of farm worker organizations. In the forty years since, NFWM has continued to support farm workers’ struggles for justice and empowerment.

The Project
In 2011, in honor of its 40th anniversary as a national organization and 90 years of standing in solidarity with farm workers, NFWM conducted interviews with some major supporters around the country.

These interviews help us look forward to the future of our involvement with the farm worker movement and also inspire others to join us. 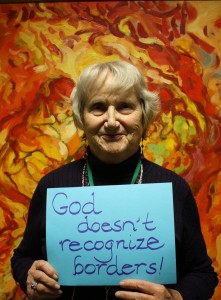 Suzanne Darweesh, former staff person of California Migrant Ministry and longtime board member of NFWM, explains the consequences of early shifts in the priorities of the farm worker ministries during the 1950s and 1960s.

Suzanne discusses the meaning of Jesus’ instructions to care for the poor in the context of the oppression of farm workers, supporting farm worker unions, and the difference between having a generous heart and doing justice. 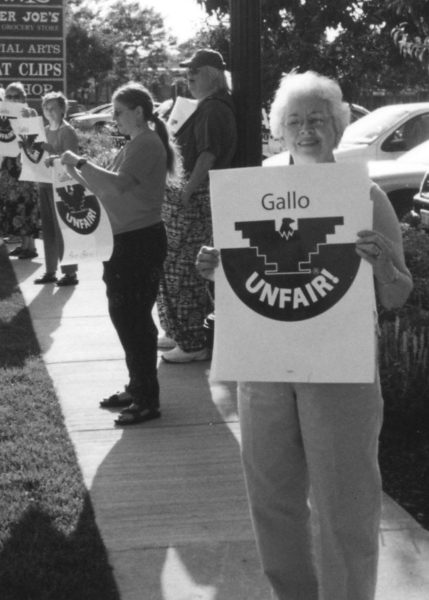 Cesar Chavez and the Mission of NFWM

Olgha Sierra Sandman, former Illinois Migrant Ministry staff person and longtime board member of NFWM, describes her conversations with Cesar Chavez when he came to a gathering of the Migrant Ministries in 1970.  NFWM was founded just months after this meeting with an explicit commitment to organizing  faith communities in support of Chavez and the United Farm Workers.

Olgha discusses her involvement with NFWM’s early support of the UFW during the grape boycott and their campaign with Coca Cola. 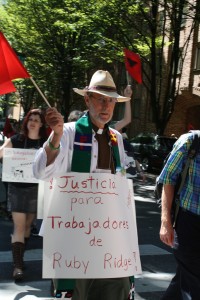 God is on the Side of the Oppressed

Ed Brandt, Lutheran minister and chairperson of the Oregon Farm Worker Ministry, discusses what he learned from being arrested for his active support and presence with farm workers who were organizing with the Pineros y Campesinos Unidos del Noroeste (PCUN).

Ed discusses various faith communities’ support of the farm worker movement, the need for collective bargaining rights, the mutual need between farm workers and churches in the United States, and why people should get involved with the work of NFWM today. 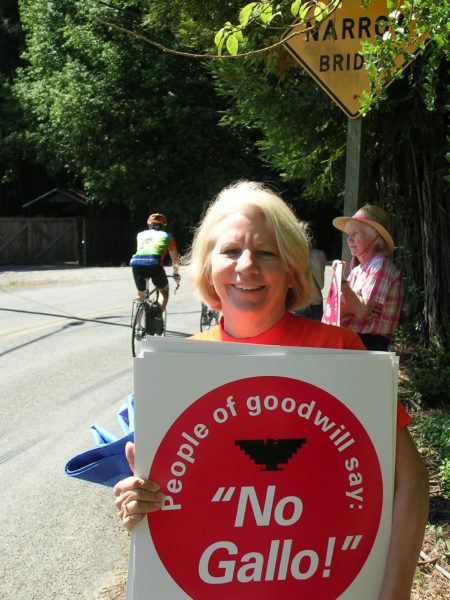 The Cost of Discipleship

Bert Perry, longtime NFWM organizer in Florida, recounts how her husband lost his job managing a Winn Dixie because of her outspoken support of farm worker unions and criticism of the most powerful players in the agricultural industry.

Bert discusses the effects of changing agricultural workforces on labor organizing and her perspective on why people should get involved with the work of NFWM. 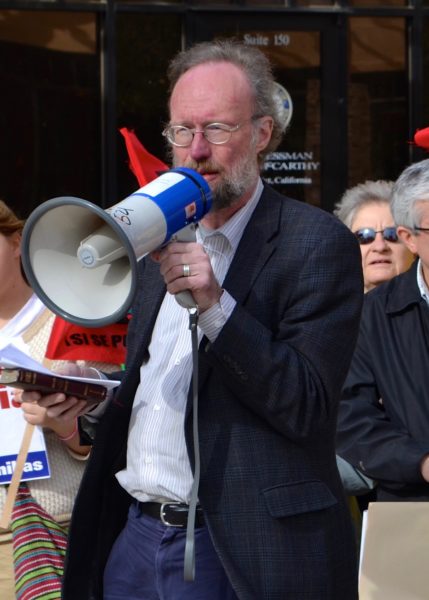 What It Means to Have a Joyful Faith

David Wildman, Executive Director for Human Rights and Racial Justice of the United Methodist Church’s General Board of Global Ministries and NFWM board member, explains what the peace movement and also middle class Christians in particular can learn from farm workers who struggle  for justice.

David discusses a Biblical argument for taking the lead from farm workers by looking to the story of Nehemiah and also referencing the ancient Hebrew prophets Isaiah and Micah. 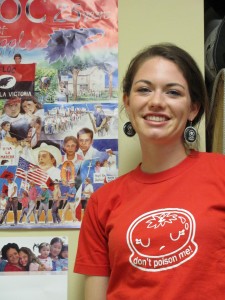 Dominique Aulisio, a graduate of the University of Central Florida and early member of the Youth and Young Adult (YAYA) network of NFWM, describes how meeting Dolores Huerta and NFWM’s Lariza Garzon led her to become a student organizer in support of farm worker campaigns.

Dominique tells the stories of different campaigns and projects that the Orlando Youth and Young Adults (YAYA) of NFWM have undertaken, including a bicycle project they developed with the farmworker organization Alianza de Mujeres Activas and the impact it had on both students and the workers involved. 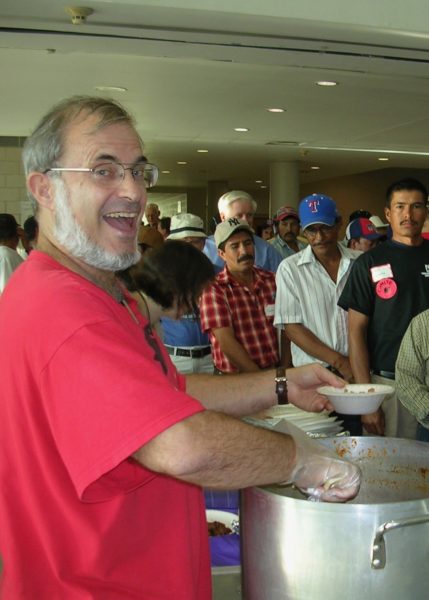 Perseverance in Support of the Boycott 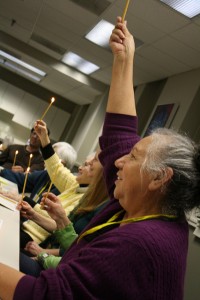 This is Our House

Lucy Boutte, Catholic lay leader and California organizer for NFWM, describes her experience at a 13-day United Farm Worker campaign in Sacramento in support of the Fair Treatment for Farm Workers Act in the summer of 2011. The bill was vetoed by Governor Brown, though he later helped to negotiate a compromise amendment to California’s Agricultural Labor Relations Act.

Lucy describes how she first got involved with the farm worker movement and the difference between charity and justice in the work of NFWM. 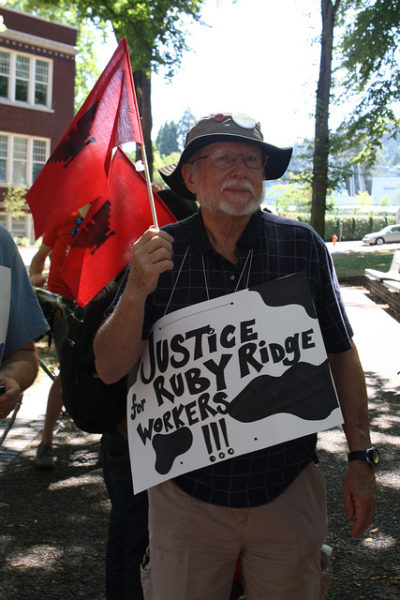 Not an Outsider: Local Organizing

Sam Trickey, professor of Physics and longtime NFWM board member, reflects on how his own cultural background gives his voice a particular power in advocating locally for farm worker justice.

Sam discusses tensions that he experienced at his job because of his outspoken support of farm worker organizing and also tells a story about Cesar Chavez’s interactions with his son when he was a young boy. 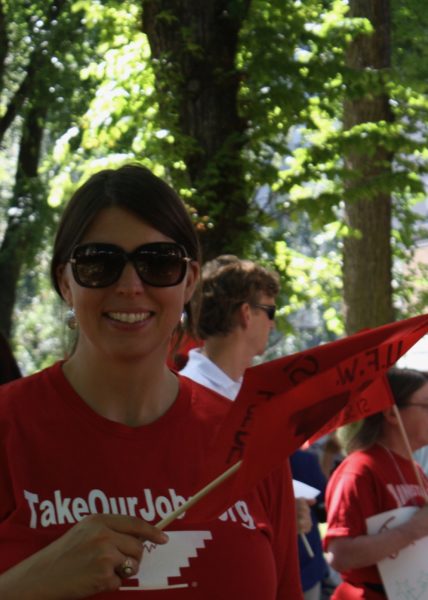 Carrying Stories Across the Country

Alexandria Jonas, former NFWM state organizer for North Carolina, describes the power of being able to connect workers organizing in California with workers in her own state through sharing their stories with one another.

Alex discusses her response to farmworker deaths in California, attending her first FLOC meeting, and the difference between being voiceless and having your voice silenced.

All photos are taken from the NFWM or UFW archives and include contributions from Alexandria Jonas, Lori Fernald Khamala, Ryan Nilsen, and Jocelyn Sherman. Ryan Nilsen conducted these interviews in July and August 2011 and compiled this project.  Special thanks to Dr. Charlie Thompson, Susan Alan, Virginia Nesmith, and all of those interviewed for their support in this project.