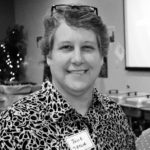 Originally from Alabama, Julie has spent time working with churches and church-related ministries. This has led her to live in Virginia, DC, New York City and now North Carolina.

Julie came to NFWM in 2015 as the Executive Director but really she came to NFWM in 2000 when she was sent to her first board meeting as a representative of United Methodist Women.  The meeting was held at La Paz, the compound of the UFW and the location of what is now a national monument and museum to Cesar Chavez.

During this board meeting Julie met a number of people who knew Cesar, worked with him, supported him and carried on the early days of the NFWM.  She fell in love with the people, with the movement, with the farm workers she met during that event.  For another 13 years she would sit on the NFWM board with a term as vice president and several terms on the executive committee.  Now, as executive director, Julie brings a growing passion for advocacy for and with farm workers.